Earlier this year the kids and I did an awesome Pirate unit as part of our homeschool. We did so many different pirate activities, including making our own telescope, playing with our pirate sensory bin, and so much more. In this post I’m detailing the Pirate Montessori activities that went on our shelves during the course of our Pirate unit.

For our pirate Montessori activities I used printables from my own Pirate Printable Pack, but I also benefitted a lot from printables created by other bloggers. I have included links to those other printables below.

I hope you enjoy taking a look at our pirate Montessori activities, and that maybe you get a little inspiration for your own pirate unit too!

Note: You can find more pirate-themed activities on my Pirate Unit Study page. 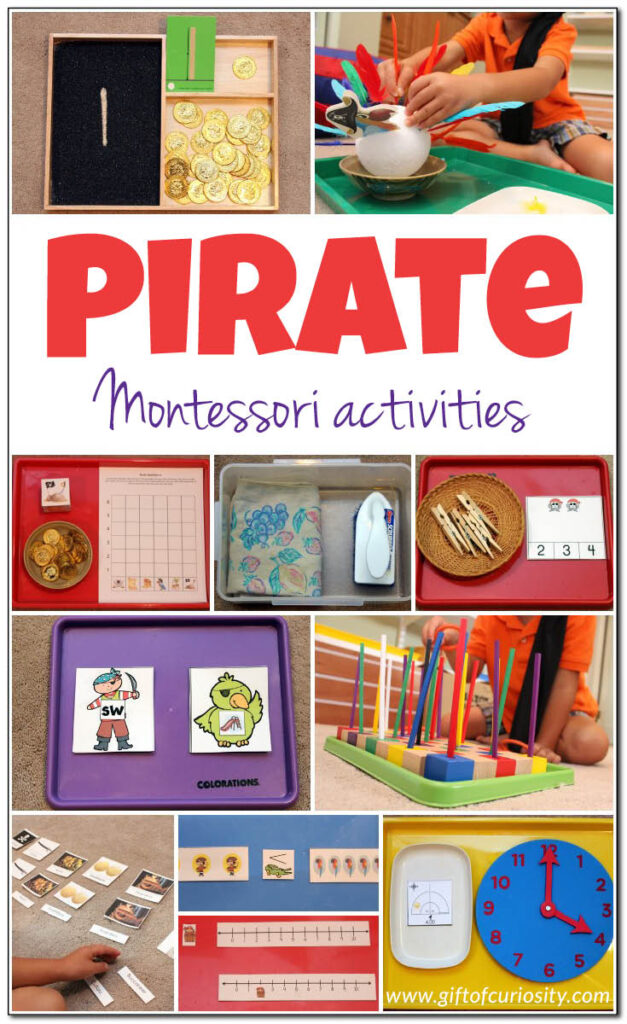 Put the Feathers on the Parrot

For this activity, I placed some colorful duck quill feathers

on a tray along with a styrofoam ball I picked up at the craft store. I printed a picture of a parrot head onto cardstock and then stuck it into the ball. 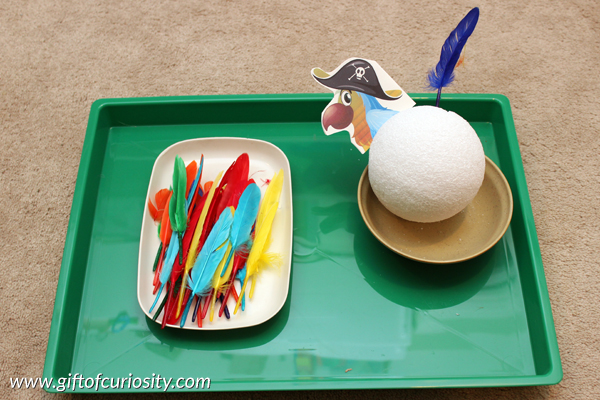 My kids then finished the parrot by adding its feathers. This was a great fine motor activity. Both of my kids spent time doing this activity during the first days of our pirate unit. 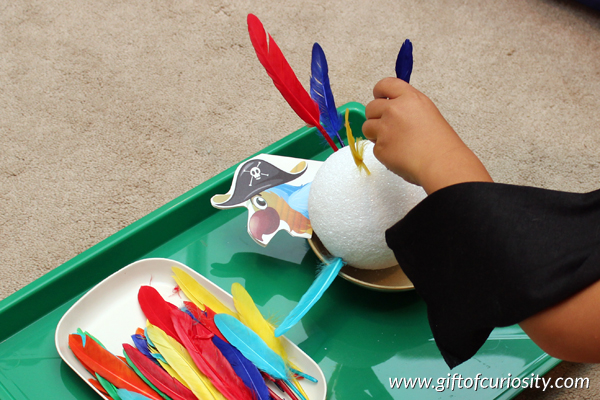 I used our Spielgaben set to set up this ring toss game. I introduced it to my kids by explaining that most ships include life preservers to be used in case anyone goes overboard. They needed to practice tossing the rings onto the poles in order to practice “rescuing” people that had gone overboard. 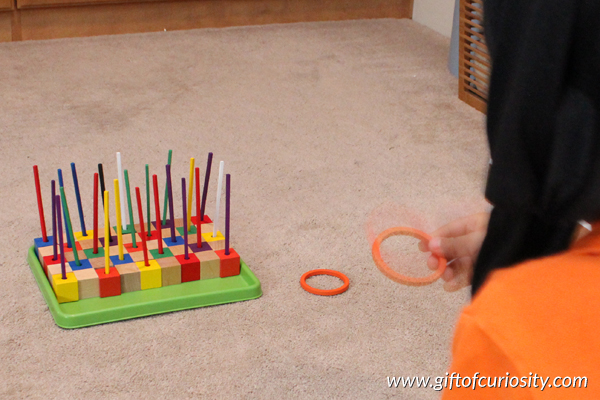 An important job on any pirate ship is to swab the decks. I set up a container with a towel and brush, and I set it on our shelves. 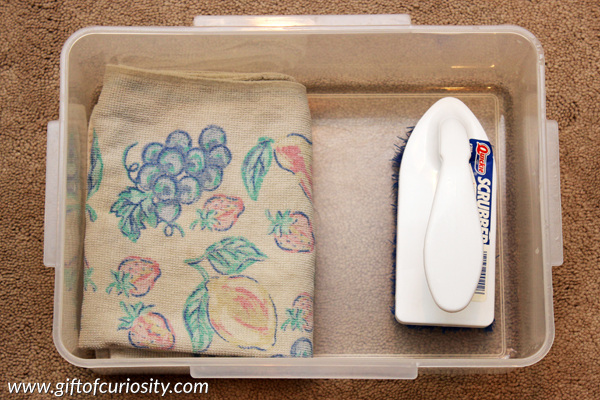 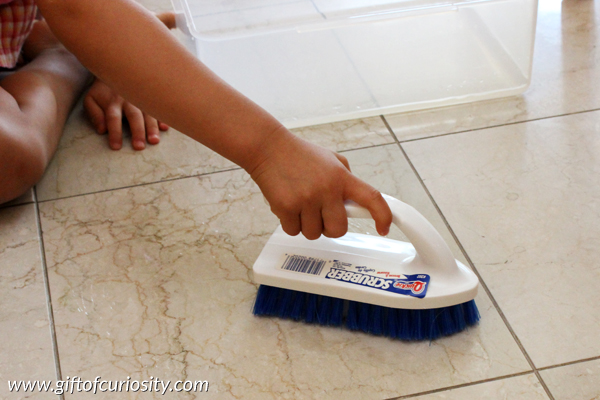 Okay, so this activity would have been more relevant to pirates if I had used rope and taught them some actual nautical knots. But I didn’t have rope, and in any case, QBoy had shown a particular interest in the twist ties that I bring home from the grocery store. So that is how this activity was born.

I set out a basket full of twist ties. 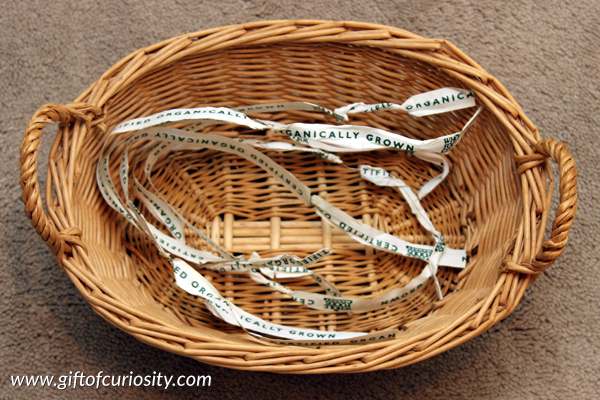 My kids then went and tied them around various  pieces of furniture. This was great fine motor practice for them. They often want to help me in the kitchen by closing bags with twist ties, but they lack the fine motor skills to do a good job. This activity was great for building this practical life skill. 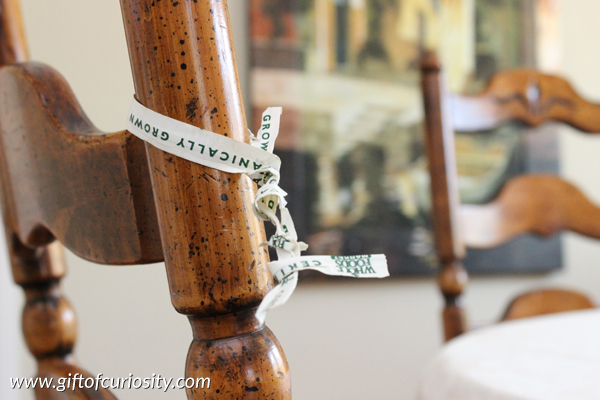 During our pirates unit we also began our study of geography. We talked a lot about maps and did several activities to learn about maps. I decided to add this pirate mapping activity to our shelves.

The objective of this activity was for the kids to use the marker and paper to crate a map of the pirate scene laid out on the tray. I used tape to stick the pirate figurines (from our Safari Ltd Pirates TOOB

) to the tray to ensure they would not move around as my kids moved the tray. 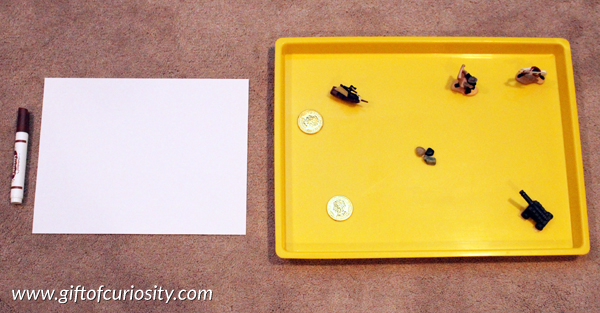 Every Star is Different put together these cute pirate 3 part cards. I printed them out and used them to help teach my kids some new vocabulary related to pirates. 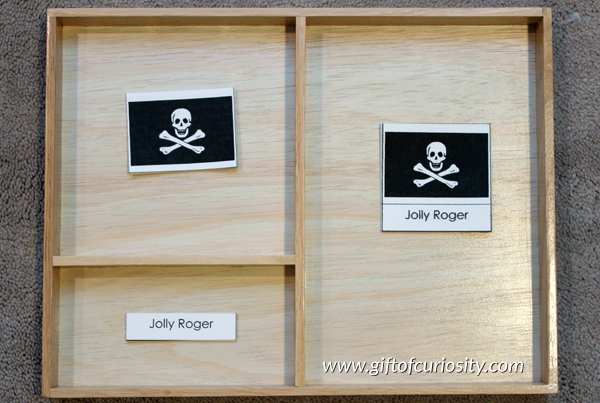 We matched the pictures and added the labels. My kids’ favorite new vocabulary word was “poop deck,” because what kid doesn’t like a chance to say “poop” and have it be totally appropriate? 🙂 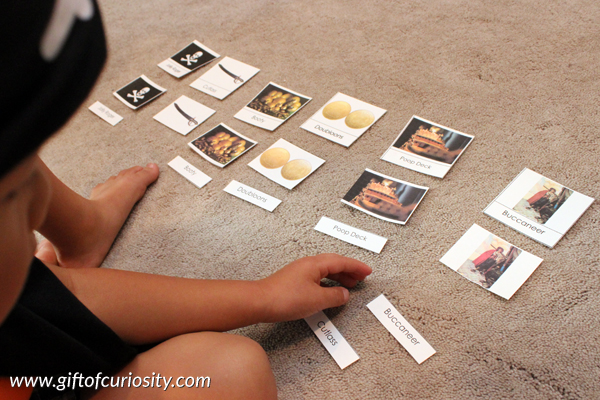 For this activity, I placed a variety of coins into a treasure box I picked up at the craft store. 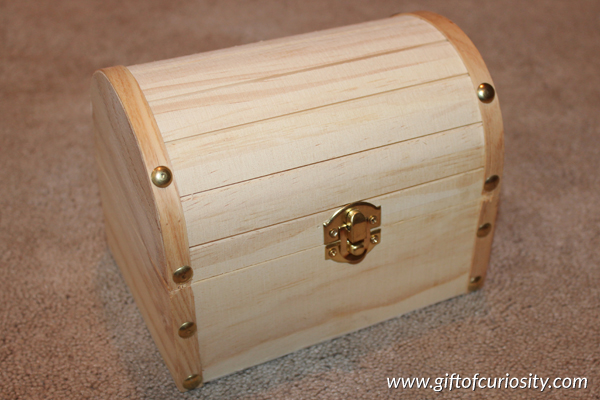 Along with the coins, I included a pirate-themed coin sorting activity from 1+1+1=1’s Pirate Kindergarten Printables. 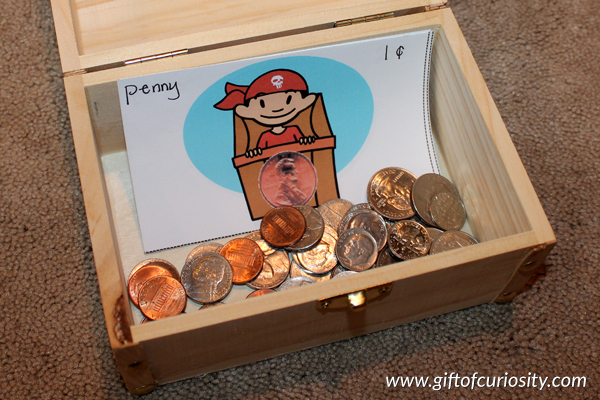 Because my kids have been getting more and more interested in money lately, this was a popular activity for them. They enjoyed sorting the coins and seeing how much money was in each group. 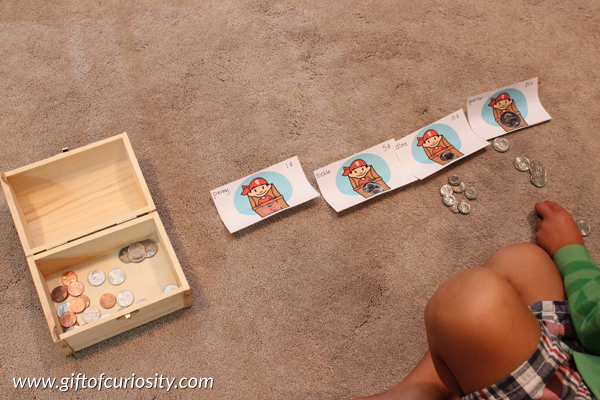 For this activity, I printed the pirate graphing activity from my Pirate Printables Pack. I used pirate gold coins

as the counters for graphing.

At the time we did our pirate unit, XGirl was working on learning her numbers up to 10. I set up this activity in a 3 part tray by placing black craft sand

in the large compartment on the left, our sandpaper numerals

in the top right compartment, and pirate gold coins

in the lower right compartment. 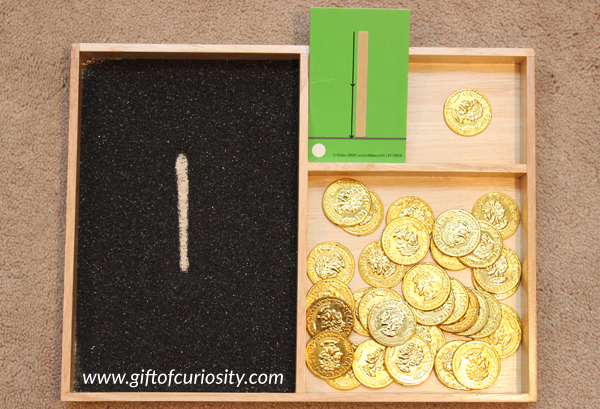 This activity had three parts. First, XGirl had to trace the sandpaper numeral. 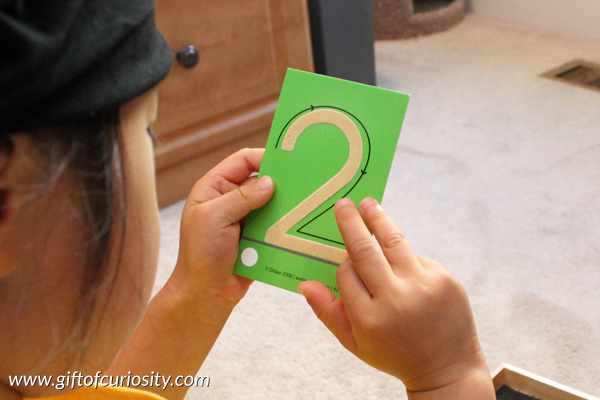 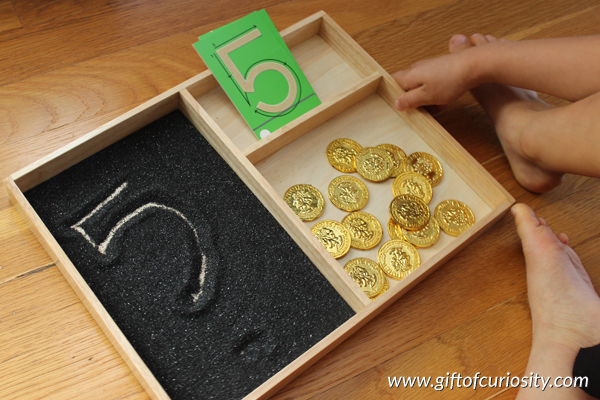 under each card equal to the number on the card. 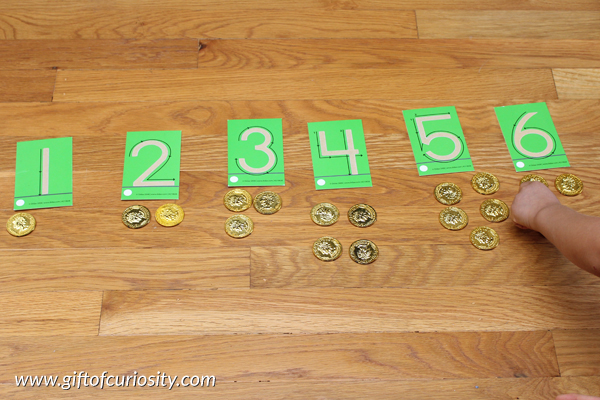 I printed this Pirate Race Game from my Pirate Printables Pack. I added glass gems and our number dice

to the tray. (I used to use jumbo foam dice

, but I switched to the number dice as my children have gotten older.) 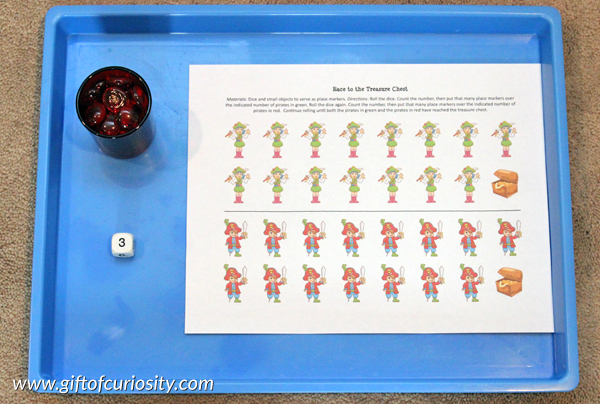 Pirate Greater Than or Less Than Practice

I wanted to introduce my kids to the “greater than” and “less than” symbols. I used this activity from 1+1+1=1’s Pirate Kindergarten Printables.

This pirates clip cards number activity comes from my Pirate Printables Pack. XGirl counted the number of pirates on the card, and then used the clothespins to clip the correct number. (I added a little dot to the back of the card so she could check her answers.) 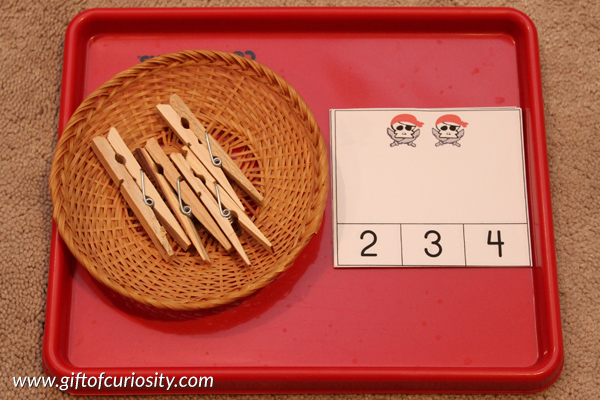 This activity comes from 1+1+1=1’s Pirate Kindergarten Printables. It involves a number line with one number covered up by a pirate. I played this game with XGirl by using the little pirate and the number line pictured on top. While she wasn’t looking, I covered one of the numbers on the number line with the pirate. She then had to look at the surrounding numbers to determine which one was covered. She loved this activity! 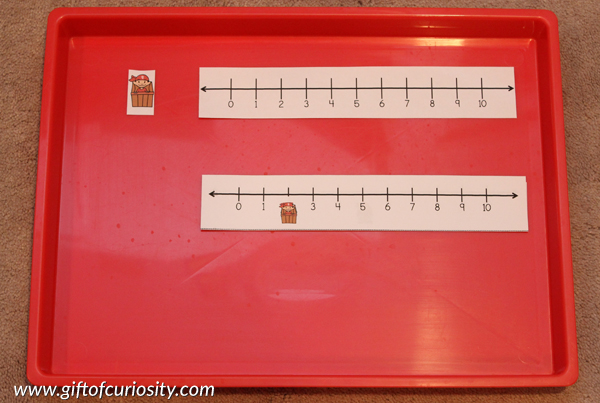 The idea for this activity – and the printable that goes along with it – comes directly from Every Star is Different’s pirate unit post. QBoy looked at the time on the sun cards, and then had to move the hands on the clock to show the correct time. 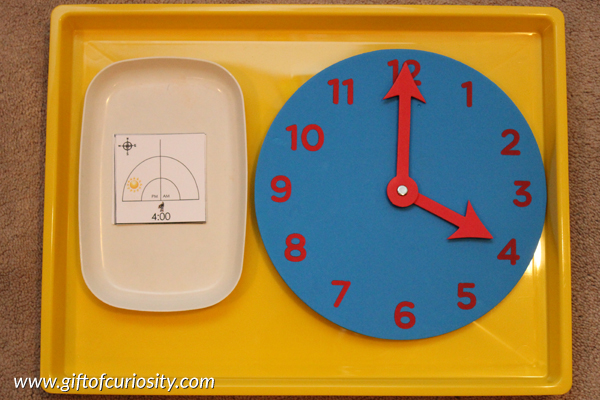 This printable comes from Ms. Kist’s Kinder Kids. She included a pirate printable to work on consonant blends, which was exactly what my son was working on at the time. 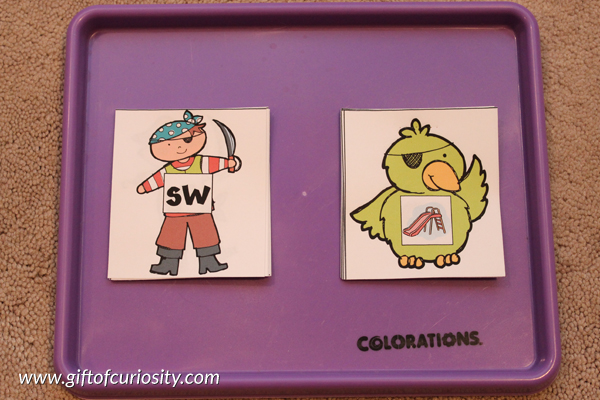