Science for kids – that’s one of my all-time favorite topics to blog about. Perhaps because my mom spent most of her career teaching science, I’ve always loved the subject. So I really hope to pass my passion for science on to my kids.

Not too long ago the kids and I did an activity about exploring candy. The kids loved watching the candy fizz, pop, dissolve, and more. So I was thrilled when Loralee Leavitt, author of the book Candy Experiments, contacted me to ask if I would be interested in receiving a copy of her book to review. I thought it would be an engaging way to do more science with QBoy and XGirl. 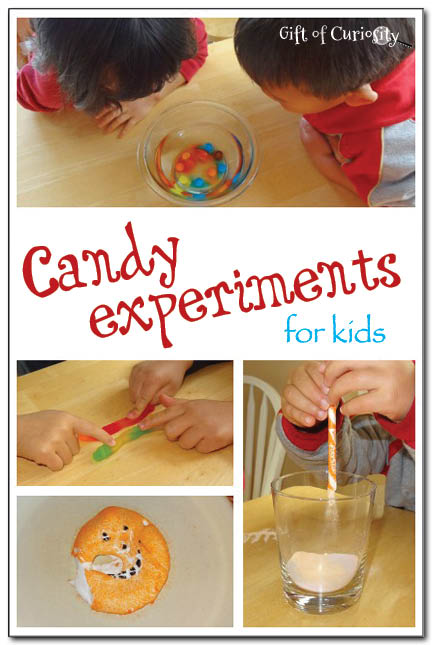 From the moment I opened the book, I was hooked. It is colorful, whimsical, and fun to look at. The experiments are well laid out with easy-to-follow directions and colorful pictures. Further – and thankfully! – each experiment includes a brief and accessible explanation of the science behind each activity. This is a life saver for parents who want to explain how and why to their kids but who don’t have a science background.

After we received the book, our family sat down to select several experiments we wanted to try. Once we had our list, my husband and kids went off to the candy store to purchase the candy we needed.

The first experiment we did was the Incredible Growing Gummi Worm (p. 72).

I gave the QBoy and XGirl two gummi worms and asked them to compare their sizes. The kids agreed that both were the same length and width. 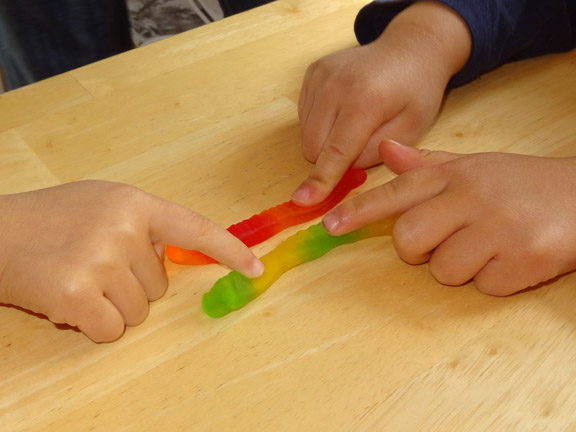 Then we placed the green and yellow gummi worm in a bowl of water. We left the red and orange gummi worm on a plate. 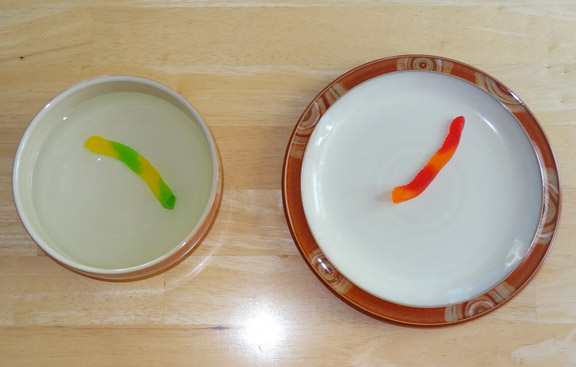 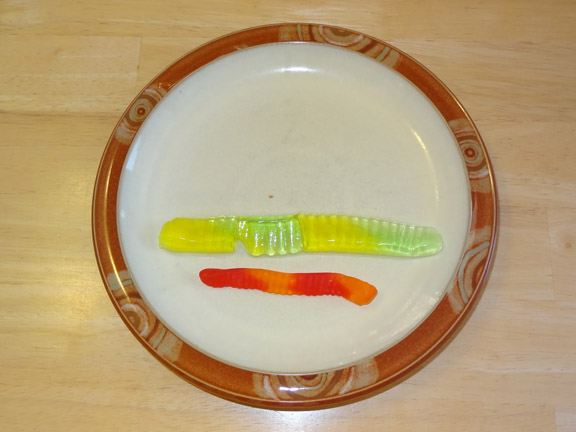 QBoy was delighted to see that the water in the bowl had turned colors, just as he had predicted. 🙂 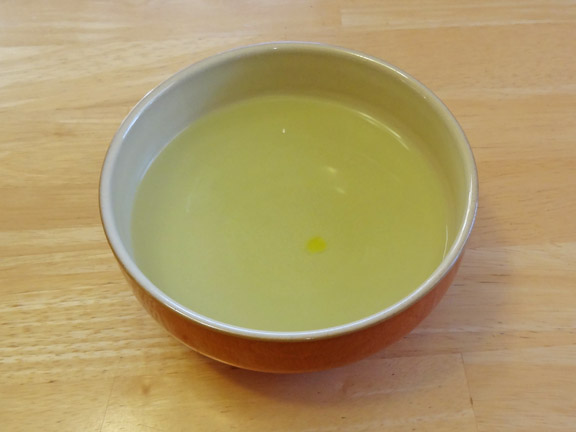 Our next experiment was the Enormous Expanding Marshmallow experiment (p. 68). My husband purchased the very last Halloween Peeps marshmallows at the candy store for this experiment, but any sort of marshmallow will do. We placed the Peep on a plate and observed its size. 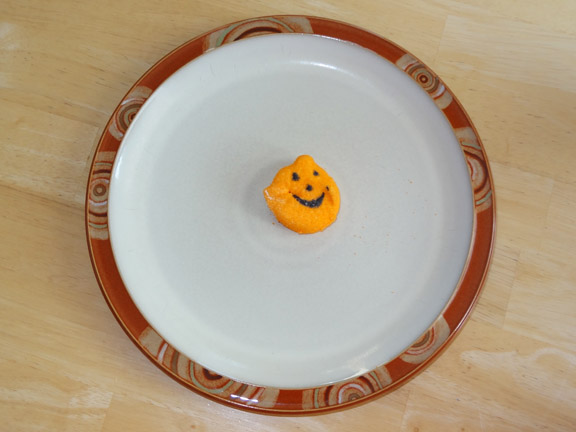 Then we placed the Peep into the microwave and heated it on high for 30 seconds. 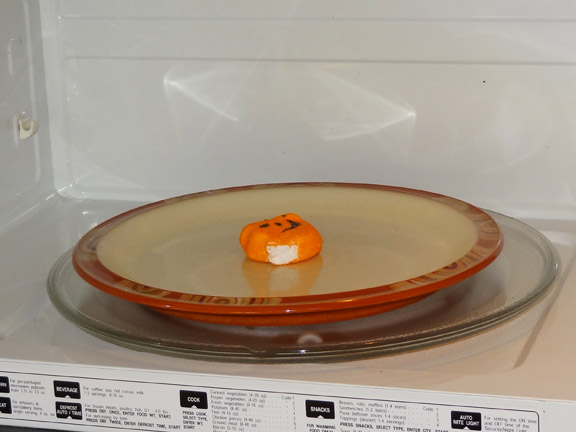 We all watched in awe as it quickly expanded in size. It was also interesting to see how quickly the Peep contracted again once removed from the heat of the microwave. 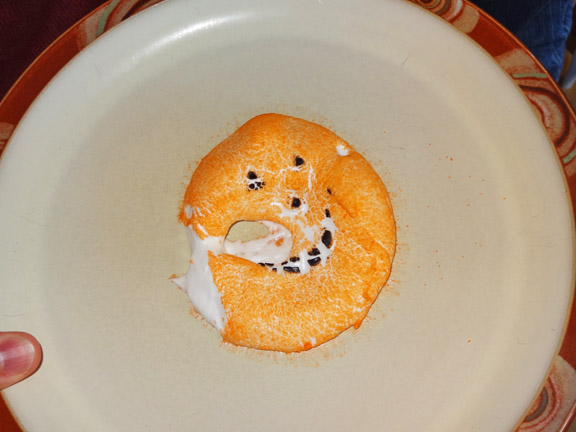 Our next experiment was Floating Letters (p. 60). The kids placed several M&Ms into a bowl of water, taking care to place the printed side face up. 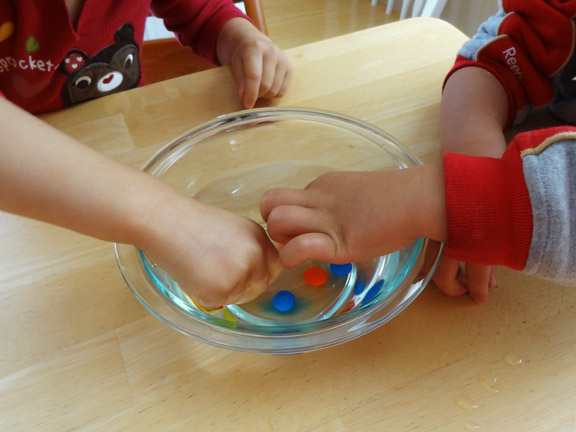 Then we watched as the colors began to dissolve off of the M&Ms. 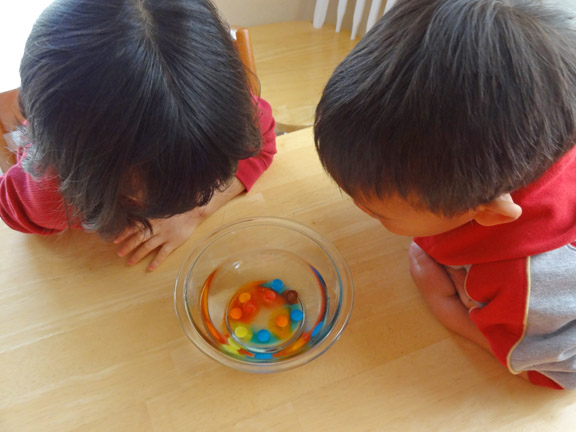 And it wasn’t long before the writing on the M&Ms began floating to the surface! 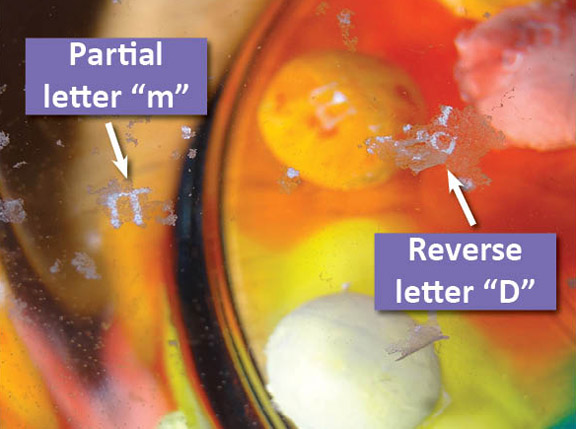 Most of the letters that floated to the top broke into pieces, but at least a few managed to stay fully intact. 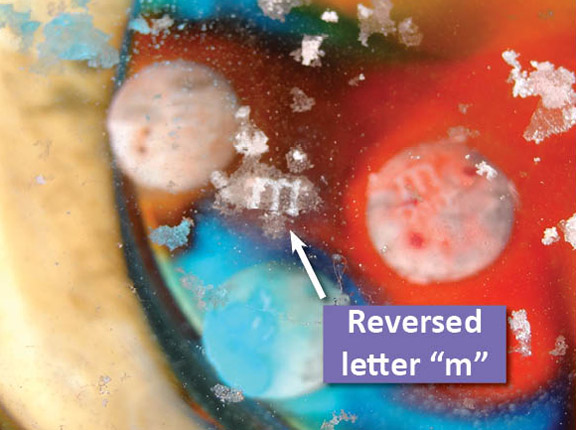 Who knew this was even possible?!?

One of the experiments I was most anxious to try was the Candy Water Cooler activity (p. 104). I had my doubts about how well the experiment would work, but fortunately my doubts were misplaced.

The kids started by emptying the sugar from several Pixie Stix into a glass. 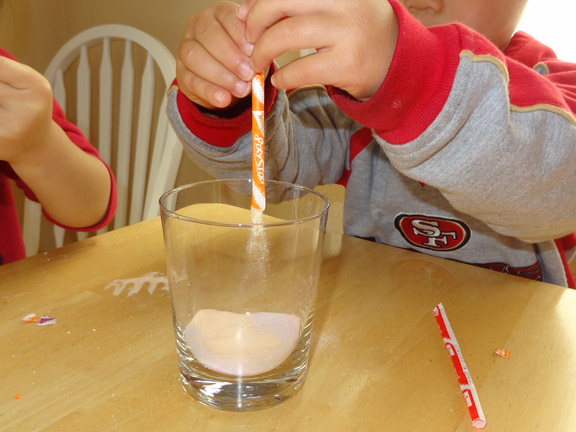 Then I filled two glasses with 1 cup of room temperature water. The kids dipped their hands inside to test the water temperature. They reported that the water in both glasses was the same temperature. 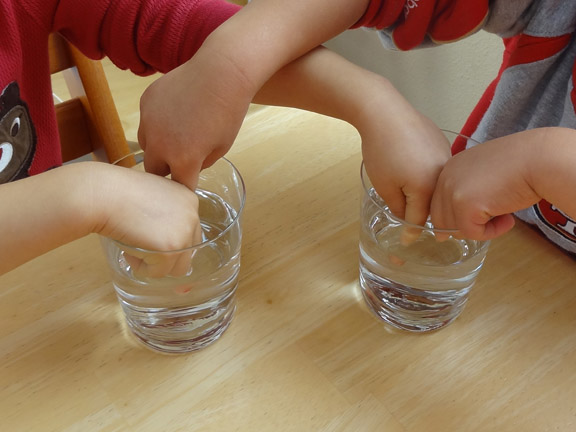 Next, I poured the sugar from the Pixie Stix into one glass and stirred it. The kids put their hands back into the glasses. This time they reported that the sugary water was colder than the plain water. 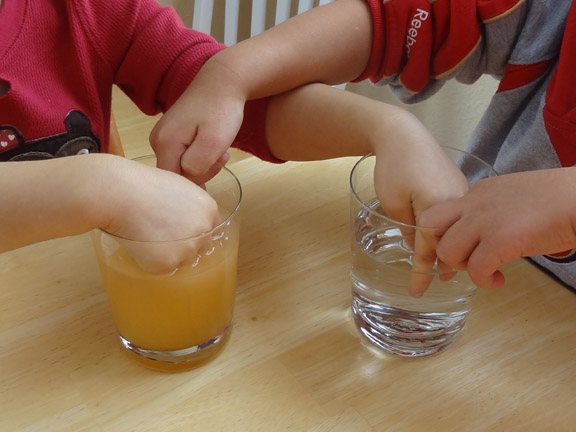 Candy experiments for kids: Trying our own experiment

One of my goals is to foster a sense of curiosity, wonder, and experimentation in my kids. Since we had two Peeps left over from our experiments, I asked the kids to come up with their own experiment using the Peeps. After some discussion, they settled on putting one Peep in cold water and one Peep in hot water. 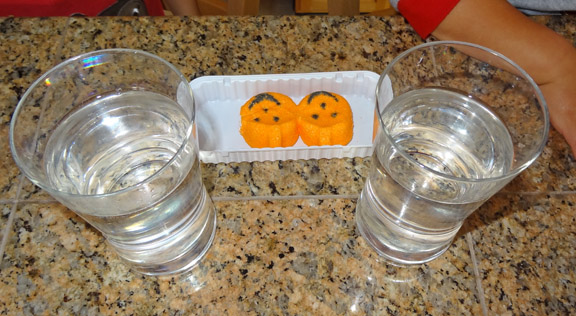 Their prediction did not turn out, since both Peeps stayed the same size. But of course, making a correct prediction wasn’t the point of the activity. Instead, my goal was for them to be curious and to practice predicting, experimenting, and thinking like scientists. 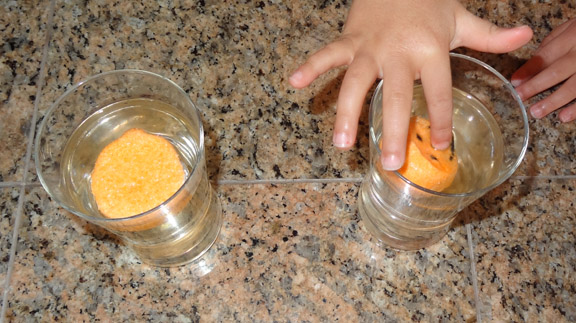 We have had so much fun with the experiments in Candy Experiments.  And of course we’ve only just scratched the surface of what is in the book. I have no doubt we’ll come back to this book again to try more activities. 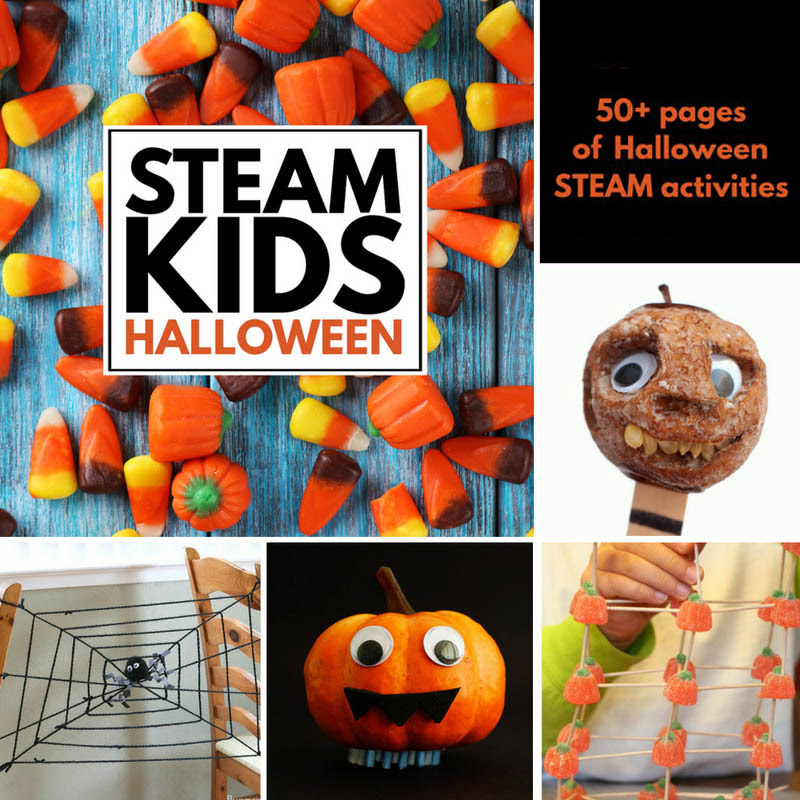 This e-book includes 50+ pages of spooky fun STEAM activities that will wow the boredom right out of kids! 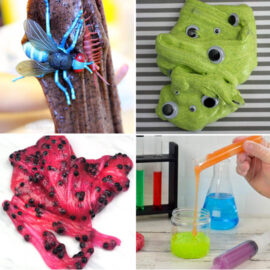 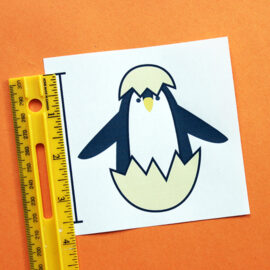 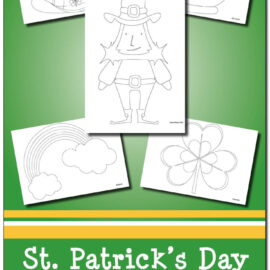