Since my kids were very little, I have involved them in helping me in the kitchen. (See my posts about kids in the kitchen here and here.)

They have also long enjoyed pretend play with food, including baking me pizzas and birthday cakes that I pretend to love (or sometimes hate, depending on what “toppings” they decide to include).

Since my kids love making “concoctions” with both real and pretend food, I thought I would invite them to make some “alphabet soup” as part of a letter learning activity.

In the next installment of my 101 Ways to Teach the Alphabet Series I explain how we made alphabet soup and what letter learning was involved in the process. Making alphabet soup can also be a great sensory play activity.

Knowing this activity was likely to get messy, we did this one outside. So I gathered the following materials and brought them to our back patio:

The kids were giddy as we headed outside and I explained to them that they were going to make “alphabet soup.” They decided that the first ingredient was shaving cream, so that went into the pot first.

Then they decided that their soup needed some color, so they added liquid watercolors.

Then it was time to add the letters.

To add a bit more challenge and include a lesson on alphabetic order, I insisted that the letters go into the soup in alphabetical order. This took more effort, because my daughter had to determine which letter was next and then hunt for it among the letters in her bowl.

Eventually all the letters ended up in the alphabet soup.

The kids stirred and stirred and eventually served me some of their alphabet soup to “eat.”

What a fun afternoon together enjoying messy sensory play and some great letter learning. I love fun and creative ways to teach the alphabet! 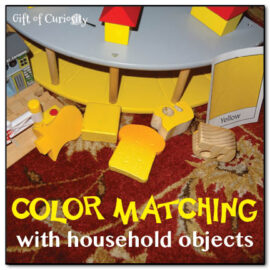 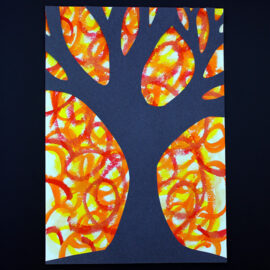