This checkout page is for the ebook only. If you want to purchase the print version, click here.

Want to set your child on the road to reading success?

Research has found that letter knowledge is by far the strongest predictor of first year reading achievement. Therefore, teaching your child the alphabet may be the MOST IMPORTANT thing you can do to help your child become a successful reader!

Who this book is for

This book is for parents, teachers, and caregivers working with children ages 2+ who are learning to identify letter shapes, names, and sounds as well as to write letters and match uppercase and lowercase letters.

What you will find inside this book

This book includes the tools you need to support a child’s letter learning progress from toddlerhood through early elementary school, including:

Get answers to your most burning questions about teaching the alphabet:

Get tips for dealing with common alphabet challenges:

101 Ways to Teach the Alphabet makes teaching letters both easy and fun!

This product is the ebook version of the book. That means you will receive a digital PDF file to download. No physical copy will be sent.

If you want to purchase the print version, click here.

Why is teaching the alphabet so important?

Educational researchers have consistently found that, among all the pre-literacy skills children are typically assessed on, letter knowledge is by far the strongest predictor of first year reading achievement. Indeed, research has confirmed that the ability to identify the letters of the alphabet is strongly associated with reading skills through third grade, and continues to be an important predictor of reading achievement through at least seventh grade.

The implications of this research are clear: Teaching the alphabet is one of the most important ways to set young children on the road to reading success.

What does it mean to “know the alphabet?”

When we say that children “know the alphabet,” we are saying that they have acquired skills and knowledge in four separate areas:

How does knowing the alphabet help kids learn the read?

How can 101 Ways to Teach the Alphabet help?

101 Ways to Teach the Alphabet includes:

What are people saying about 101 Ways to Teach the Alphabet?

“This ebook was exactly what I was looking for! It has a variety of ideas and tons of printables to keep my child interested without repeating things too often. I also love that everything is explained and found the forward invaluable. As a parent who homeschools the internet is often VERY confusing for information on what I should be using to teach my kids. Great resource that will keep giving on many levels.” – N.R.

“For parents and teachers who want a research-based introduction to teaching the alphabet, plus a huge treasure chest full of fun, developmentally appropriate activities, this is the book to get. I love that it’s organized by skill (letter recognition, letter sounds, etc.) and that each activity begins with bullet points summarizing the exact skills and interests that will be covered.” – H.H.

“I work with 4 years young. Your book has brought a new insight and motivation about learning the alphabet.” – B.C.

Thank you so much. I LOVE your book. It is working for my grandson. Just received a pic. with him holding up a piece of paper on which he wrote his name. He was so proud and grandma, too!

Here is what you will find inside this jam-packed book:

Chapter 1: Why Teach the Alphabet? 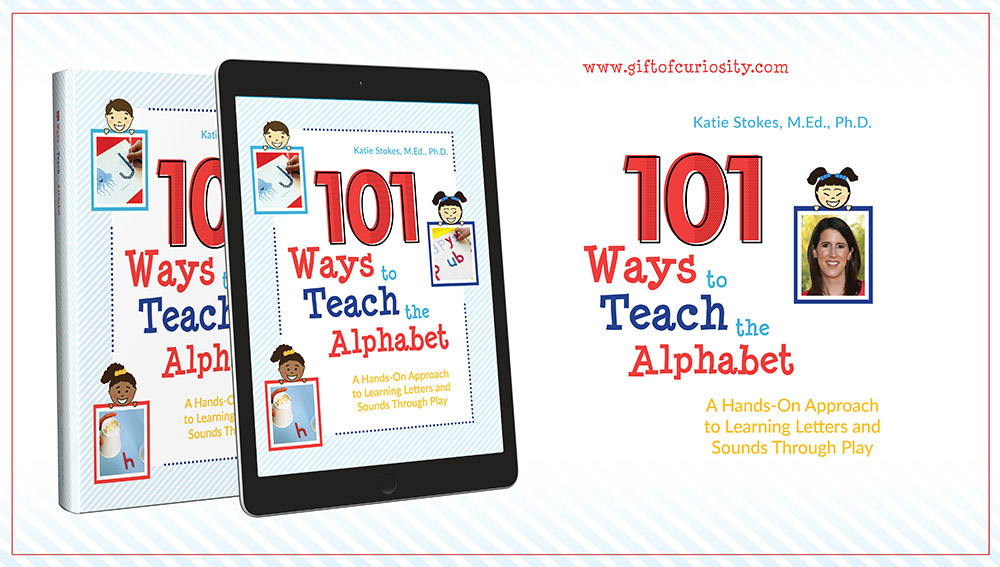