This candy cane science experiment was the perfect way to combine two of my favorite things: science for kids and Christmas activities for kids.

I love doing science with my kids. Maybe it’s because my mom – the kids’ grandmum – was a science teacher for most of her career. Or maybe it’s just because kids are like mini scientists themselves in the way they explore the world.

And of course, few things say Christmas like candy canes. So that’s why I was so intrigued by the candy cane science experiment at Preschool Powol Packets where they put candy canes in water and watched them dissolve. We decided to build on that idea by comparing how candy canes dissolve in a variety of mediums.

We started by filling two glass bowls with liquid – one with water and one with vinegar.

(My kids were playing dress up that morning and had decided to put on their Halloween costumes,
which is why my daughter is dressed as a bumble bee and my son is dressed as a tiger. :-))

Then we dropped in our candy canes.

Within a couple of minutes the red dye had started dissolving into the water. I put white paper under the bowls to make it easier to see the color that had dissolved off.

After about 30 minutes, the candy canes had completely dissolved. All we had left was a bowl of liquid with some pinkish stuff at the bottom. The kids were pretty fascinated by the change.

After about half an hour we checked on our candy canes again. The candy cane in the oil had barely changed at all. There was just the tiniest amount of pink sediment at the bottom, but the candy cane was essentially unchanged.

Neither candy cane, however, had dissolved nearly as much as the candy canes we had put in water and vinegar.

We did check on the candy canes again several hours later. The one in the oil was still largely unchanged but the one in apple sauce had gotten very, very thin. In fact, it snapped in half when I picked it up because it was so thin and fragile.  Unfortunately, I didn’t get a picture of the candy cane at that stage, but the kids were duly impressed by its changed state.

What medium would you try dissolving the candy canes in?

This e-book includes 25 days of holiday projects that will wow the boredom right out of kids! 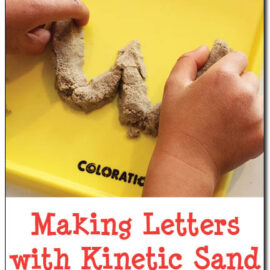 Making letters with kinetic sand {101 Ways to Teach the Alphabet} 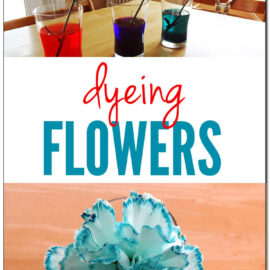 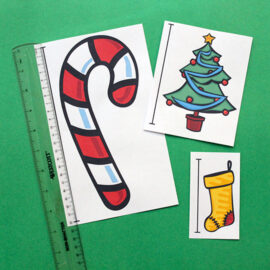