The moon is such a wonderful topic to study with young children. Historically, the moon has received a great deal of attention because it is the brightest object in our night sky. Kids are also fascinated by the changing shapes of the moon over the course of every 28 days. And it could be argued that one of the greatest engineering feats of all time was landing a man on the moon and bringing him safely back to the Earth. 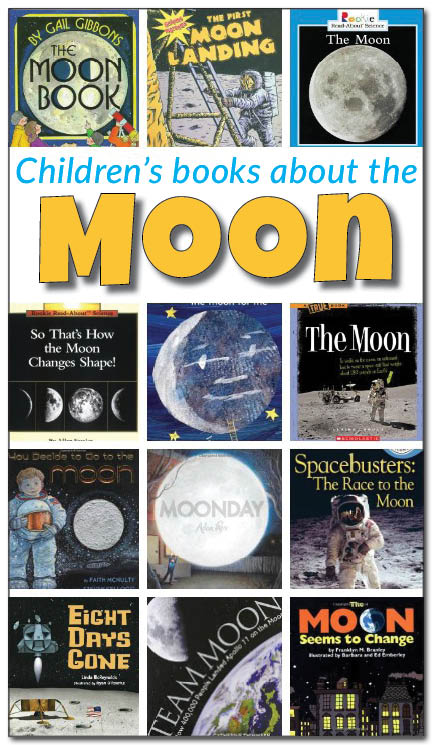 Non-fiction books about the moon

This is a simple, straight forward book about the moon from the Rookie Read-Aloud Science series. It features real photographs and photo illustrations accompanied by about three sentences per page. The book describes how the moon was formed, what the surface of the moon is like, why the moon seems to change shape during the month, and how astronauts landed on the moon in 1969. This is a good book to read aloud to kids ages 4-6, or for early readers to enjoy on their own.

So That’s How the Moon Changes Shape!

This is another book from the Rookie Read-Aloud Science series. Unlike “The Moon” by Carmen Bredson, this book by Allan Fowler focuses solely on explaining why the moon seems to change shape over the course of each month. The book shows and describes several phases of the moon. It also deals with two common misconceptions: that the moon is actually changing shape and that the moon generates its own light. The book uses mostly real photographs plus simple text to help children understand how the moon changes shape. This is a good book to read aloud to kids ages 4-6, or for early readers to enjoy on their own.

The Moon Seems to Change

This is a great book for helping children ages 4-8 to understand why the moon seems to change shape over the course of each 28 days. It provides labels for certain phases of the moon (full, quarter, and crescent). It also discusses how the moon appears to wax (get bigger) and wane (get smaller). Little diagrams plus a suggested activity help kids understand how it is the way the moon orbits around the Earth that makes it appear to change shape from night to night. This book dives into much more detail about the phases of the moon than the book by Fowler reviewed above.

This is a wonderful and informative book about the moon. This book begins by discussing the various creatures people have historically “seen” in the moon, such as the man in the moon and the rabbit in the moon. It then explains what the surface of the moon is really like, and how we have learned about its surface by sending astronauts to moon. The book describes what it feels like to walk on the moon. It also compares the unchanging surface of the moon with the constantly changing surface of Earth. The back of the book includes several ideas for activities kids can do to learn more about the moon.

This book discusses the distance from Earth to the moon, the phases of the moon, what the surface and atmosphere of the moon are like, how the moon was formed, how many people have walked on the moon, and how astronauts survive in space. The book uses bold photographs and graphics along with fun typeface to appeal to kids. Given the amount of text and the kind of information included, it is most appropriate for kids ages 7-10.

Non-fiction books about landing a man on the moon

This book documents the Apollo 11 journey from Earth to the moon and back with snappy rhymes and kid-friendly illustrations. The text is limited, so it lacks details about the mission. However, it is a great introduction to the Apollo 11 mission for young children ages 3 to 6 who won’t sit through a long book. And despite the sparse text, the book does do a good job covering many aspects of the mission. With any luck, this book will spark young children’s interest in travel to the moon, preparing them to learn more detailed information as they get older.

by Elizabeth Hudson-Goff and Dale Anderson

This book tells the story of the first moon landing in comic book format. Unlike many other books about the moon landing, this book also discusses the geopolitics between the USSR and United States as well as some of the early Apollo missions leading up to the moon landing. But the bulk of the story has to do with the Apollo 11 mission that saw Americans Neil Armstrong and Edwin “Buzz” Aldrin be the first humans to set foot on the surface of the moon. This book will be most appreciated by kids ages 8 and up. However, my 5-year-olds asked me to read this book over and over (although some of the geopolitics admittedly went over their heads).

Spacebusters: The Race to the Moon

This book tells the thrilling story of the Apollo 11’s journey to the moon. It features mostly real photographs of the mission coupled with a few illustrations to explain how Neil Armstrong, Edwin “Buzz” Aldrin, and Michael Collins traveled to the moon and back. This book does a good job of portraying some of the anxiety of the trip, such as the difficulty Armstrong encountered when trying to land the lunar module on the surface of the moon, and the fears faced by all three astronauts that Armstrong and Aldrin would not be able to leave the moon and return to earth with Collins. At the same time, the story also helps the reader understand just how much fun Armstrong and Aldrin had getting to explore the moon. This book is geared toward kids ages 7 to 9 who are independent readers, although slightly younger kids may enjoy the story as well if an adult shares it with them.

I don’t typically review books for kids older than 9, but this Team Moon book was too good to leave out. This book provides a wonderful historical account of the Apollo 11 mission to land a man on the moon back in the 1960s. Unlike any of the other books I have reviewed, this book goes into much more detail about the people working behind the scenes to prepare for the moon landing. We learn about many of the test missions undertaken on Earth before Apollo 11 was launched, how NASA prepared for the television coverage of the mission, how the astronauts were trained to take good photographs on the moon, and much more. The book includes lots of first person quotes from people involved in the mission, making it a wonderful resource for historians of the moon landing. The level of detail in this book make it most appropriate for kids ages 10 and older.

Fiction books about the moon

If You Decide To Go To The Moon

Although this book is a work of fiction, there are many truthful elements to the story that will help children better understand what space travel and the surface of the moon are like. The story follows a young boy who decides to go to the moon. He travels there by rocket ship, and the details about his journey are rich with facts about moon travel, such as how long it takes to get there, what other objects you might encounter on the way, and what it is like to be weightless. The boy eventually lands on the moon and enjoys a spacewalk. He experiences walking in less gravity than on Earth and the eerie quiet of the moon. After visiting the astronauts’ camp and planting a flag, he returns to Earth with deeper appreciation of the importance of protecting our home planet.

How to Bicycle to the Moon to Plant Sunflowers: A Simple but Brilliant Plan in 24 Easy Steps

This book is adorable, but obviously totally fictitious. Kids may not learn much about the moon while reading this, but they will enjoy seeing the lengths to which one boy will go to in order to carry out his plan to bicycle to the moon and plan a garden of sunflowers. Written as a set of 24 steps, the book shows how one would fashion a huge sling shot, prepare an extremely long garden hose, borrow a space suit from NASA, and pedal a bike to the moon in order to plant a sunflower garden.

Papa, Please Get the Moon for Me

Monica is a young girl who wishes to play with the moon. So she asks her papa to get the moon for her. Her papa fetches a very long ladder, places it at the top of a very tall mountain, and climbs up to reach the moon. But when he gets to the moon, Monica’s papa sees that the moon is much too big. The moon tells her papa that each night it will get a little smaller. “When I am just the right size, you can take me with you,” the moon says. Over the next several days the moon gets smaller and smaller. And when it is the right size, Monica’s papa returns to take it and give it to his daughter. Monica is so excited, but the moon continues to shrink until it finally disappears all together. This book features Eric Carle’s beloved artistry. And for added fun, many of the pages fold out to extend the story both upwards and outwards.

Meet Me at the Moon

Mama Elephant must go away to ask the skies for rain. Little One worries about being on her own. Mama assures her, “You will feel my love in everything around you.” Mama tells Little One to lister for her sound in the wind and to feel her love in the warmth of the sun. Most importantly, Mama tells Little One that they will see each other again when they meet when the sky is bright where the moon touches the Earth. Little One waits patiently, and eventually it is time to find her mama again. She sees that the sky is bright, and crosses the plains to where the moon meets the Earth. And there the Little One reunites with her mama set against the backdrop of the full moon.

Rabbit and the Moon

This story is an adaptation of a Cree legend based on the markings of the moon that look like a rabbit. In this story, Rabbit is an Earthly creature whose greatest wish is to ride upon the moon at night. He makes many unsuccessful attempts to reach the moon. But eventually he enlists the help of a crane to fly him to the moon. And today, many people still see a rabbit when they look up at the moon.

A young boy wakes up one day to discover the moon has settled in his family’s backyard. At first the boy is fascinated and excited by the moon. Unfortunately, the moon’s arrival also means that morning fails to arrive in his town. All the kids are sleepy at school. People fall asleep in their cars. And the moon brings a flooding tide in to the family’s backyard. So eventually, the family drives the moon to the top of a distant hill and leaves it there. They go home to bed, and enjoy a good night’s sleep.

More resources to learn about the moon

More posts about the moon from Gift of Curiosity:

You’ll find more resources for learning about the moon on my Space Unit Study page and my Space and the Solar System Pinterest board.