I recently completed a preschool ocean unit with my two kids, 4-year-old QBoy and 3-year-old XGirl. I like to include at least one sensory play activity in all of my units.  In fact, because our ocean unit lasted quite a while, I ended up doing two ocean-themed sensory bins for the kids to explore.

My rationale for including sensory play in our unit studies is first and foremost because my kids enjoy sensory play so much. They are always excited to see a new sensory bin and they stay engrossed with sensory play for quite a while. In the case of our ocean unit, however, the ocean sensory bins provided my kids with opportunities to engage in small world play. By this I mean they were able to use the materials in the bin to explore some of the things they had been learning about ocean animals through dramatic play. 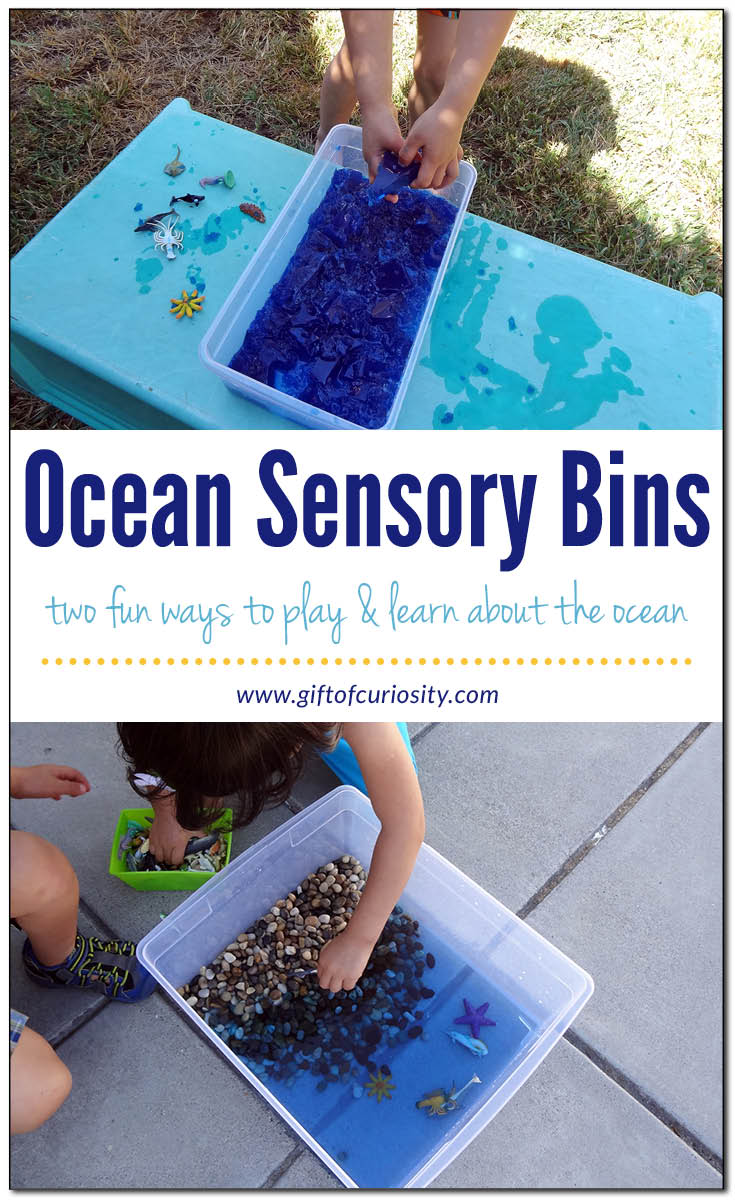 The first bin was a gelatin ocean sensory bin. I prepared it by placing some of our ocean animals into the bottom of a plastic bin. (The animals were from the Safari Ltd Ocean Toob

I purchased on Amazon and a sea life set from Oriental Trading Company.) 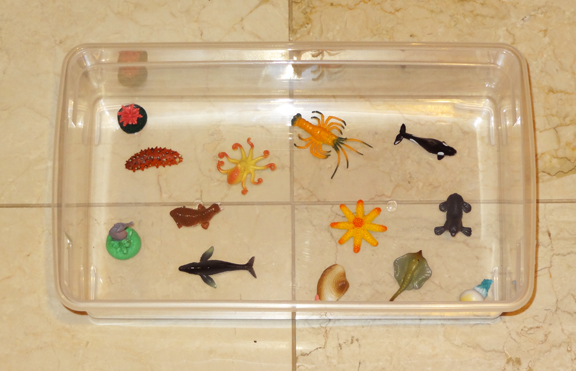 Next, I prepared some blue gelatin (by adding blue liquid watercolor

to Knox gelatin) that I poured over the animals. It turned out that the blue liquid watercolor

was more potent than I expected, and the “ocean” ended up being quite a bit darker than I had planned. 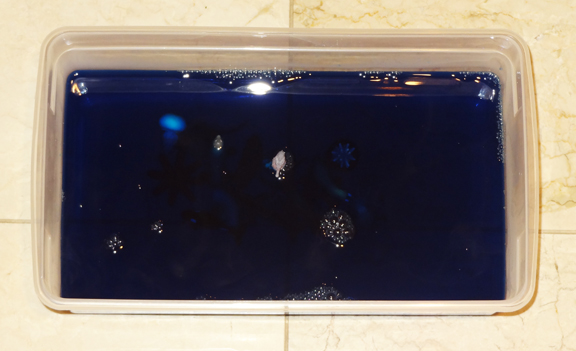 The kids were unfazed by the dark color of the gelatin ocean, fortunately. They were just excited to get their hands in the bin to dig out the animals. 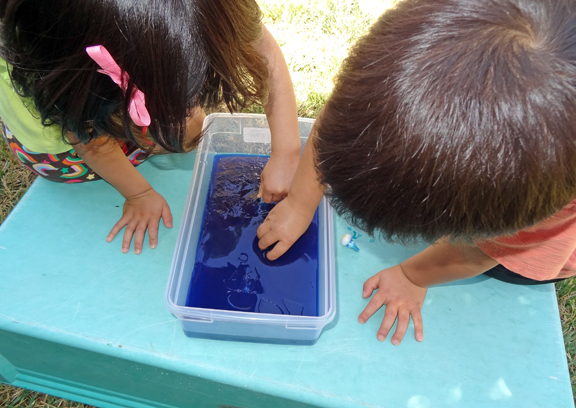 As they removed each animal, this provided an opportunity for us to discuss the name of each animal. 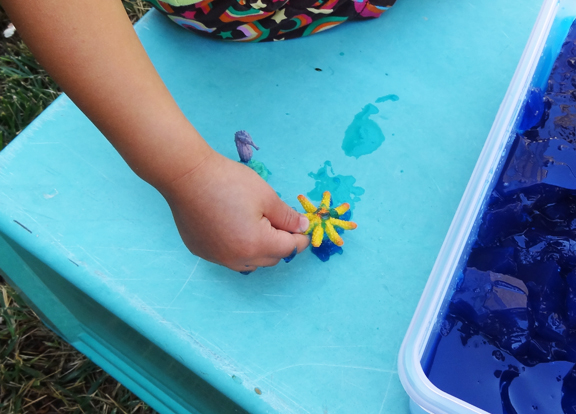 Eventually, all the animals were out and the kids just had fun playing in the gelatin mixture. 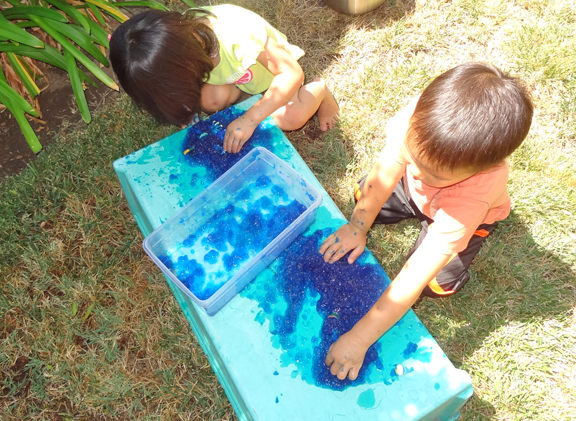 They each gathered their own bit of gelatin “ocean” and put their animals in it. 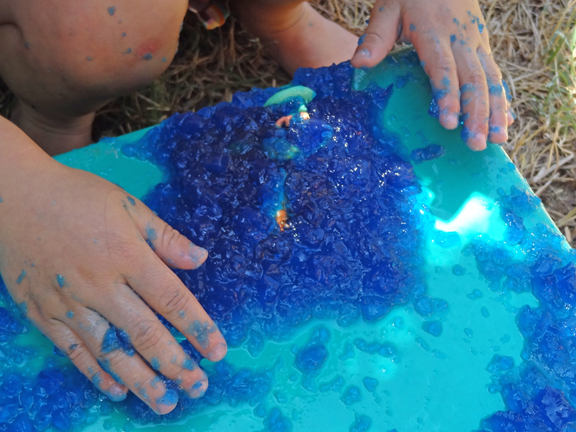 This sensory bin was extremely simple to prepare, but still tons of fun for the kids. All I needed for this bin was some small rocks, some water (lightly dyed using blue liquid watercolor

), and a bunch of our ocean animals. (The animals were from the Safari Ltd Ocean Toob

I purchased on Amazon and a sea life set from Oriental Trading Company.) 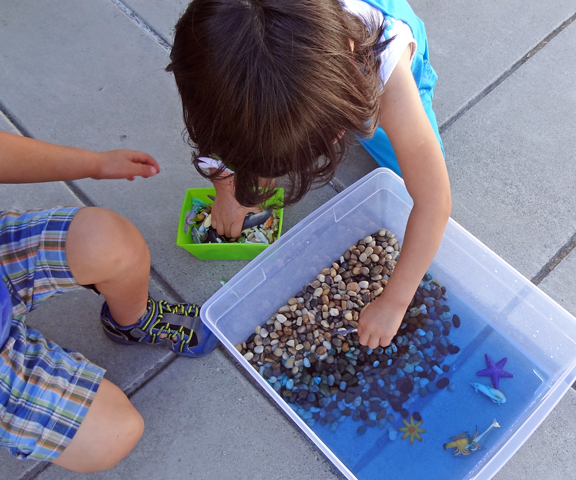 The kids went right to work placing the animals into the ocean. As they did, we discussed the name of each animal and whether it lived just in the water or could also go on land. 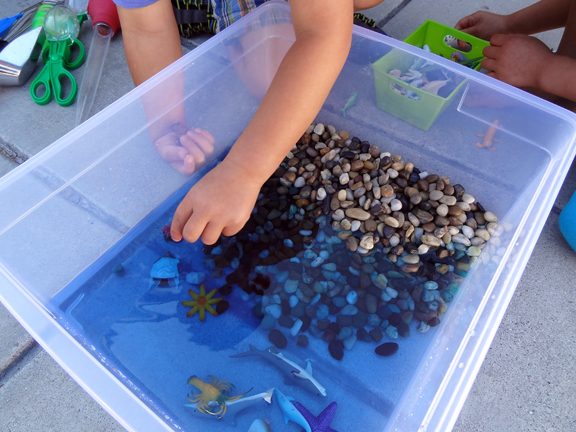 It wasn’t long before the kids took notice of the tools I had laid out for them to use with the bin. QBoy started with the easy grip tongs

. His favorite animal is the sea lion, so of course he started by tonging the sea lion from the bin. 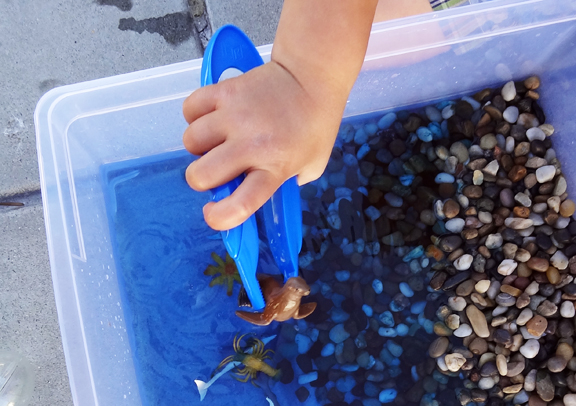 and began to scoop the animals out of the ocean. 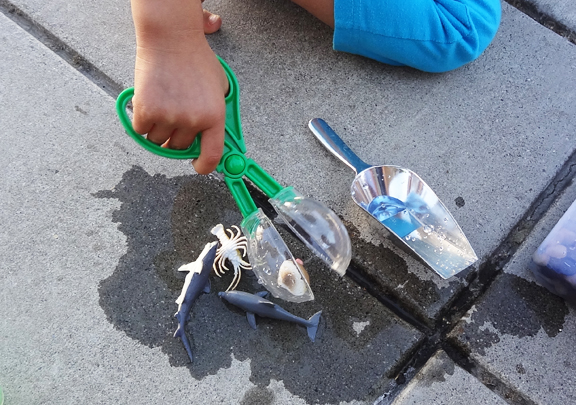 QBoy then decided to use our baster to suck up the ocean water and rain it down on the animals. 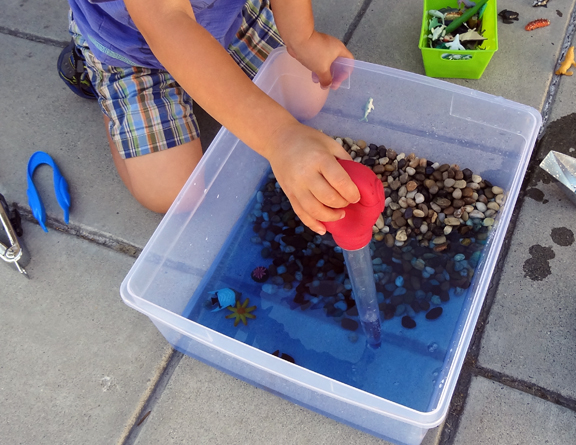 As I watched them play with all the materials, I was reflecting on the fact that so much of what they were doing with this bin was straight out of the Montessori practical life curriculum. The fine motor skills they gain by doing these activities are going to help them with writing and with daily life tasks later on. But all they care about is that they are having fun. 🙂 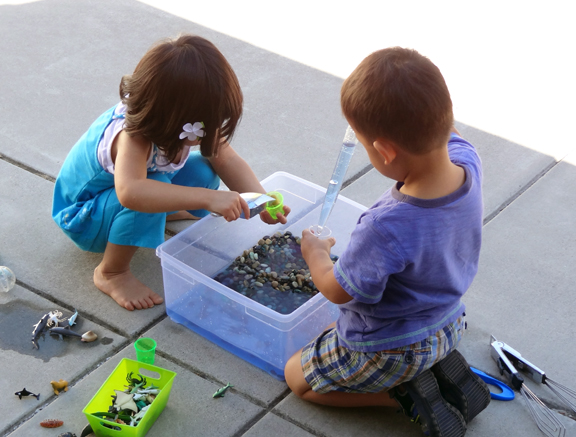