Perhaps the most enduring symbol of fall is the changing colors of the leaves on the trees. In our area, the leaves generally don’t begin changing color much until at least late September, but sometimes not even until late October. Last year we collected a number of beautiful fall leaves, and we thought it would be fun to try different ways of preserving them.

The trouble was figuring out what the best way to preserves leaves is! I read about several different methods online. Ultimately, we decided to test out three different methods for preserving leaves to see which method we liked best. 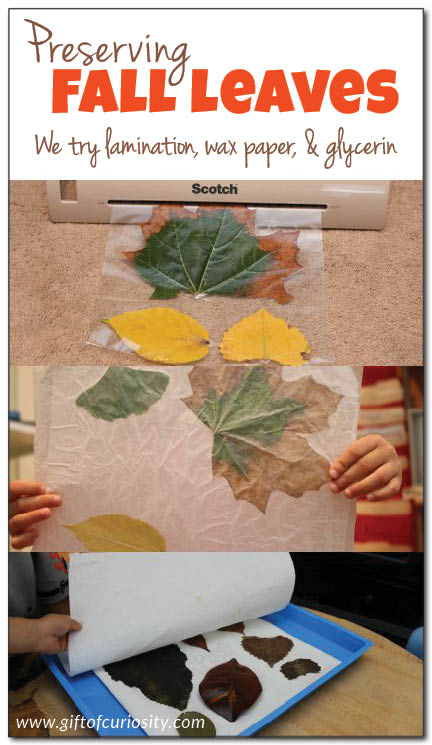 Our whole adventure started with a trip to a local park where were collected a nice variety of fall leaves. We then sorted the leaves by type. We took one sample of each type of leaf to use with each of our three leaf preservation methods. 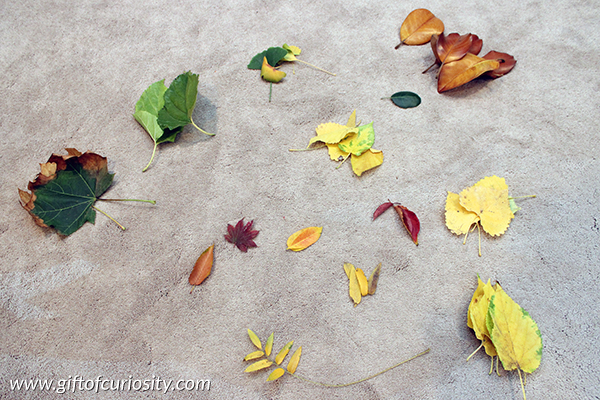 The first method we attempted was to preserve the leaves by laminating them. I pulled out our awesome home laminator and a bunch of laminating pouches. I placed as many leaves as would fit into each laminating pouch and ran it through the laminator. The laminator struggled a bit with some of the stiff and bumpy leaves, but otherwise handled the job fairly well.

We generally liked the results. The leaves were shiny and smooth from the plastic. They felt very sturdy, like they would hold up for a long time. However, by laminating them they lost some of their “leaf” feel, since they now felt like plastic instead of leaves. Some, but not all, of the leaves also discolored from the heat of the laminator machine, very quickly turning a dark brown. 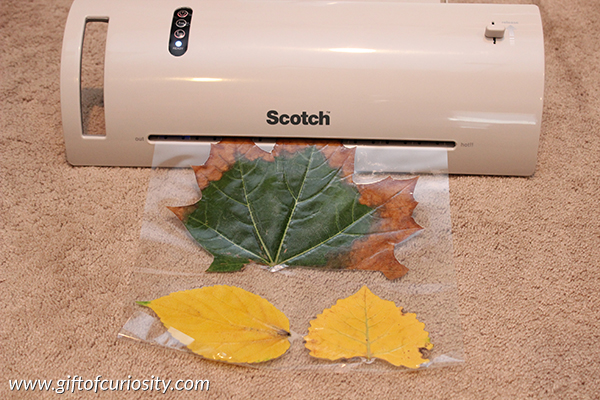 In an attempt to preserve the leaves with wax, I placed the leaves between two sheets of wax paper and we ironed them between a towel. (Note: an adult should carefully supervise if children are allowed to use the iron. Use good judgement when deciding whether your children are ready to use an iron.) 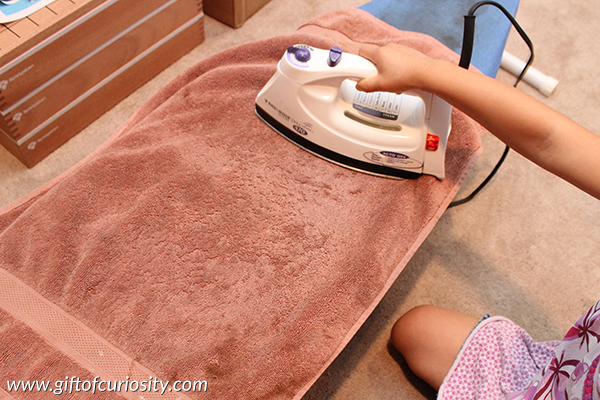 So this method was a bust for us. But I’ve read that it has worked for others. Maybe we just had a bad brand of wax paper? 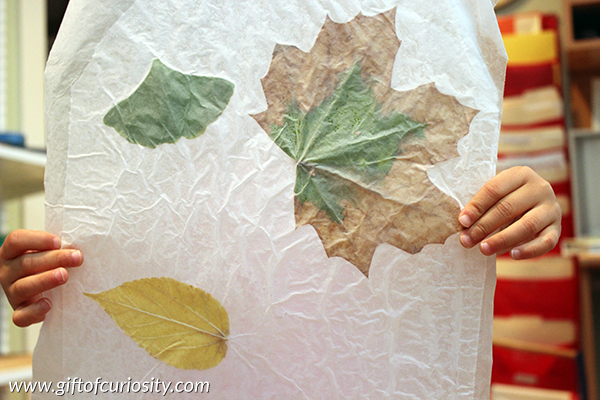 The third method we tried was to preserve the leaves with glycerin. I placed a handful of leaves in the bottom of a container. I then added enough glycerin to cover them. I put another container on top and weighed it down with a jar in order to ensure the leaves would stay submerged in the glycerin. 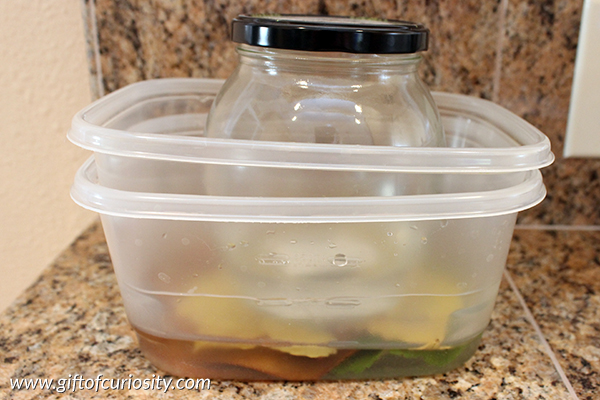 We left the leaves in the glycerin for a week. It may be possible to leave them in for less time, but based on information I’ve read online I would recommend leaving them in for at least 3 days. When we removed them from the glycerin, we placed them on paper towels to let them dry.

We were generally pleased with the results. The leaves maintained a more natural feel. They remained pliable and had their regular texture, unlike the laminated leaves. Some of the glycerin-preserved leaves became discolored soon after they were removed from their glycerin bath. 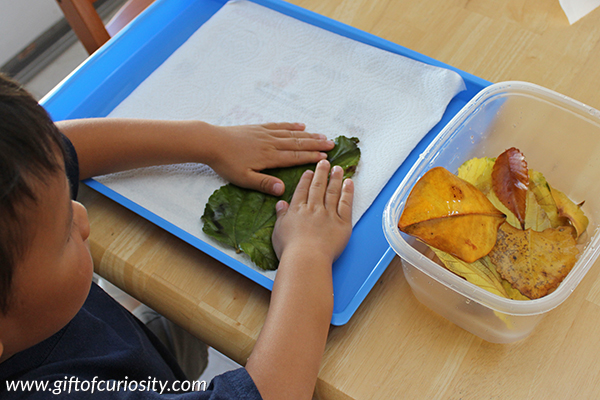 After our experiment with finding the best way to preserve leaves, the kids and I discussed our results.

XGirl like the laminated leaves best, as she enjoyed the very glossy feel. She also liked how sturdy they were.

QBoy, on the other hand, preferred the glycerin soaked leaves for their more leaf-like feel.

I found benefits to both methods. The laminated leaves were very sturdy, and might work best if the leaves were to be used in any capacity in which the kids could be rough on them. The glycerin leaves, however, definitely felt more natural, so would be best when a more natural feeling leaf was desired.

We all agreed that the wax paper leaves did not work. 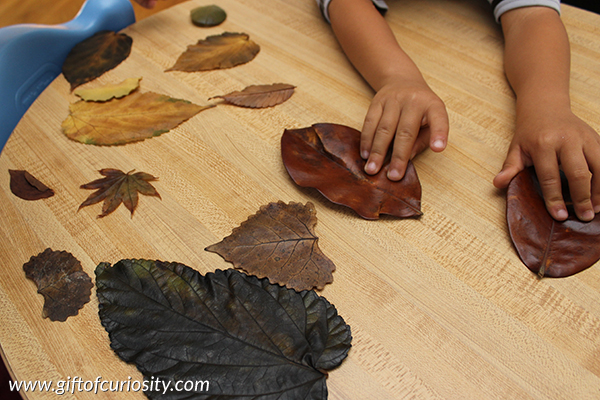 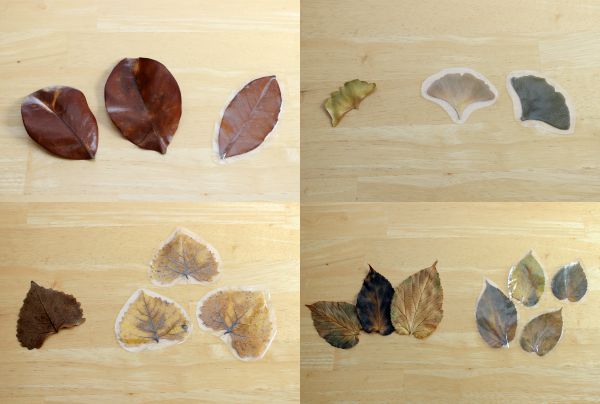 More resources for learning about leaves 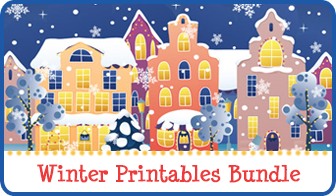