I have been focused on teaching my kids about polar animals this winter. After we did our recent Arctic animals unit, I decided it was time to turn our attention to the most famous animals of the Antarctic: penguins! I planned a series of penguin activities to teach several lessons about these adorable animals. I also used my kids’ interest in penguins to teach some basic math skills. This post shares all of the penguin-related activities we did on a recent morning. 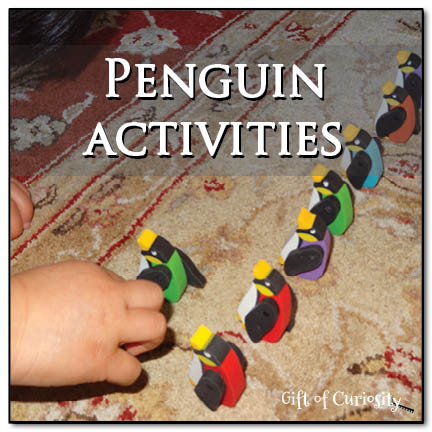 We started off by watching two videos of penguins:

The kids loved watching the videos, and together we talked a lot about how the penguins keep the eggs and baby chicks on their feet and under their tummies to keep them warm. The kids were so fascinated by this.

One thing we learned from the videos and books was that the penguins living in Antarctica huddle together in the winter in order to stay warm. So I planned a little game to underscore that point.

I had some small penguins that I scattered around our living room. 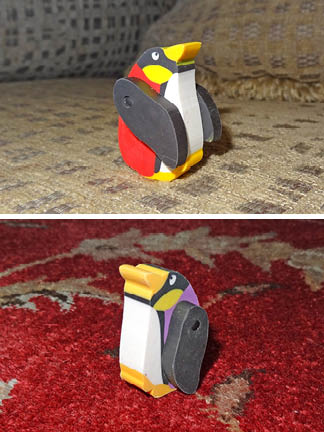 I explained to the kids that the penguins were feeling very cold because they were not huddled together, and the goal of the game was to gather all the penguins as fast as possible to huddle them together again. The kids loved scrambling around the room to pick up the penguins. 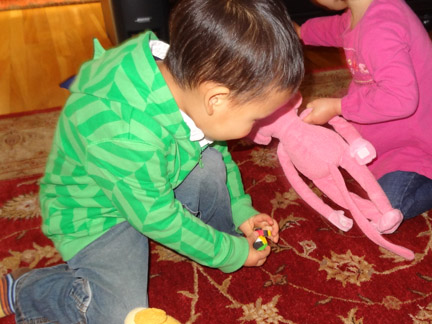 And then they huddled them together to help them stay warm. 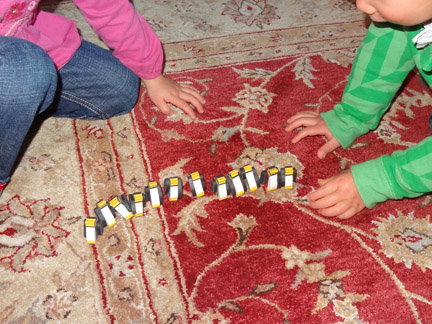 Next, we played a penguin math game. I gathered all of the penguins and put them into a pot. 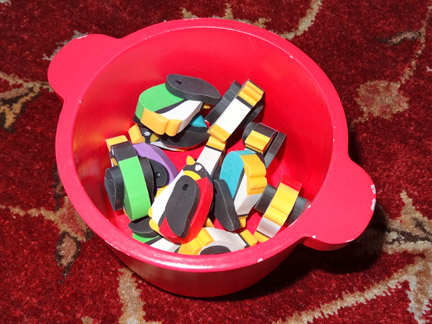 Then the kids took turns rolling a jumbo dice 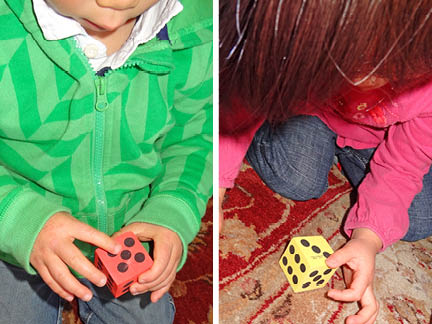 They had to count the number on the dice and then take that many penguins out of the pot to put into their pile. 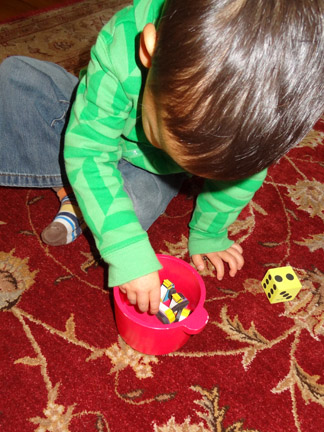 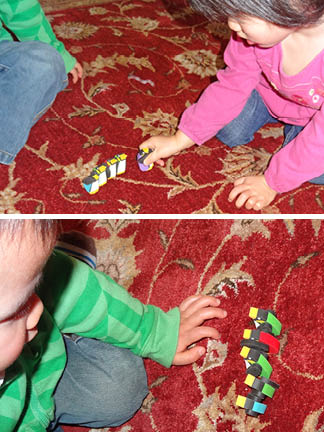 When there we no more penguins in the pot, we counted up the number in each kids’ pile. 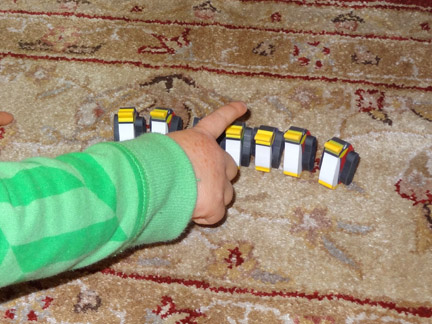 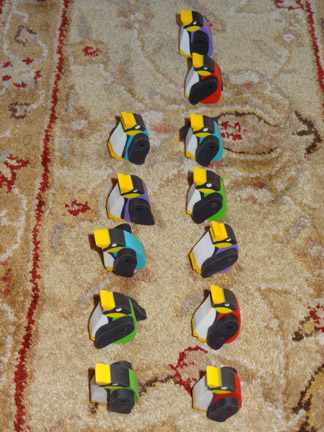 Then we tried another activity to simulate how the penguins hold their eggs on their feet and tucked under their bellies. Using a belt and a small pillow, I fashioned a big tummy for both kids. 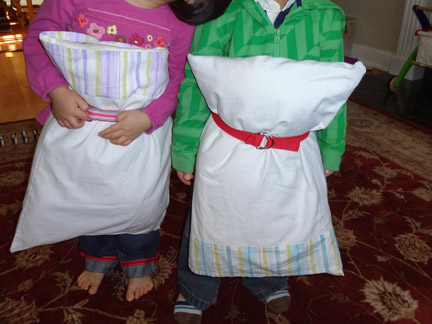 Then I had them stand with their feet together while I put a “penguin egg” on their feet. 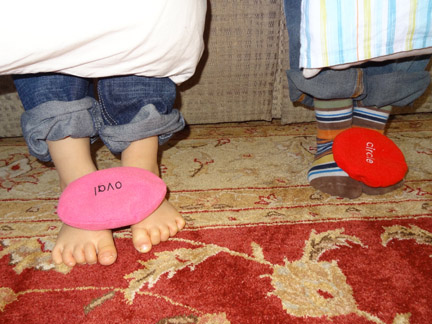 Then I asked them to walk across the room without dropping the egg. Well, it turns out that was pretty much impossible!  I tried it as well and I could not keep the darn egg on my feet! But we were all laughing so hard that it didn’t matter.  🙂 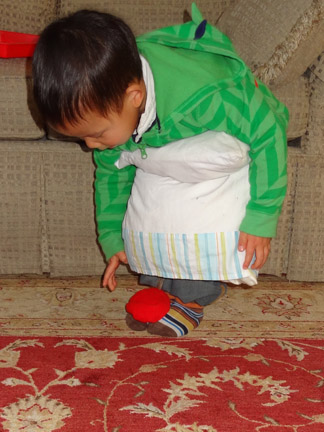 After doing these activities, QBoy really got into the idea that he was a penguin who had to protect his baby penguins from the cold. He did not want to take off his tummy, but instead wanted to use to take care of his “baby penguins” to keep them from getting cold. He spent half of the morning carrying around his baby penguins like this: 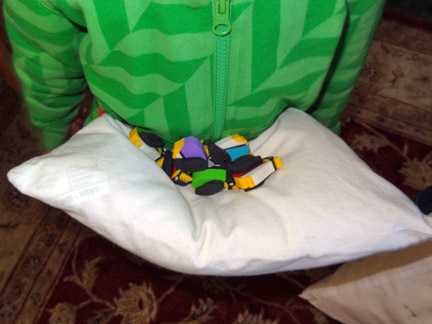 Finally, both kids did some work on individual skills. QBoy did a few penguin-related math exercises. The first was this Penguin Subtraction worksheet from my Winter Printable Pack. 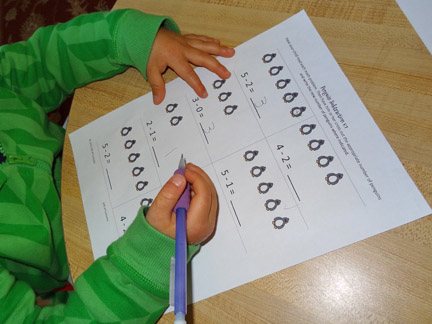 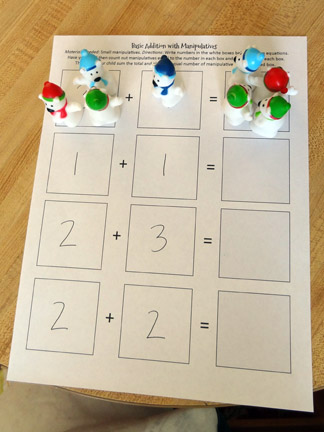 And that’s what we did to learn about penguins!

You’ll find more resources for learning about penguins and other polar animals on my Polar Animals and Lands unit study page and my Polar regions Pinterest board.