But what is pattern recognition?

Pattern recognition is the ability to see order in chaos. Patterns can be found in words, numbers, symbols, schedules, behaviors, and more.

Once my kids had mastered these basic patterns, I knew I needed to up my game. So I put together some activities focused on advanced pattern recognition skills of two or more patterns combined.

In this post I’m showing you some of the patterns I put together for my kids to hopefully inspire you to try something similar with your own children.

One of the first patterns I put together for my son used three different colors of tiles. The tiles alternated between standing up and laying down (the AB pattern) as well as between yellow, blue, and red tiles (the ABC pattern). QBoy used additional tiles to continue the pattern. Can you see that the next shape in the pattern will be a blue tile that stands up?

With this pattern my son had to recognize the increasing pattern of small, medium, and large circles (the ABC pattern) as well as the fact that every three circles the color switched between red and blue (the AAABBB pattern). Can you see that the next shape in the pattern below will be a small blue circle?

This pattern got a bit more complicated, with at least three overlapping aspects to it.

This was the most complicated pattern I put together for my son to figure out. There are three overlapping patterns here. The first is an AB pattern of blue vertical stick and no stick. The second is an ABC pattern of cube, cylinder, sphere. The third is an ABCD pattern of yellow, orange, blue, purple. Can you see that the next item in the pattern below is a blue cube with a vertical stick in it?

It is always a good idea to introduce new concepts like these advanced patterns using materials your children can physically manipulate, as shown in the photos below. However, if you like these activities and if your children are ready, you may also want to check out my Advanced Pattern Worksheets as well. These worksheets provide additional practice with several different types of advanced patterns.

For more activities, resources, and printables for teaching math, see my Math Activities for Kids page and my Math Pinterest board. 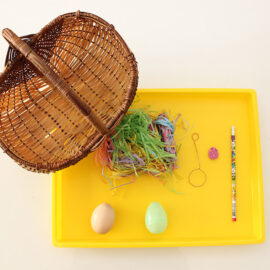 Easter game: What’s in the bag? 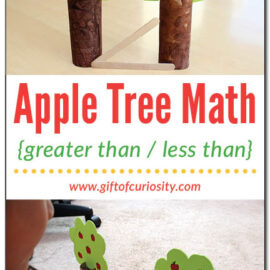 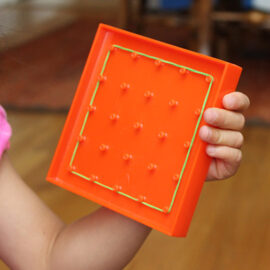 Making shapes on the geoboard