If I had to guess what foods American children like best, pizza would definitely be at or near the top of my list. The combination of tomato sauce and mozzarella cheese along with the option to fill the pizza with favorite toppings makes pizza such a mouth watering food.

In this post I have compiled a list of 15+ children’s books about pizza. This list includes mostly fiction stories, although I also reviewed a couple of non-fiction books as well. I hope your children enjoy these kid-friendly books about pizza! 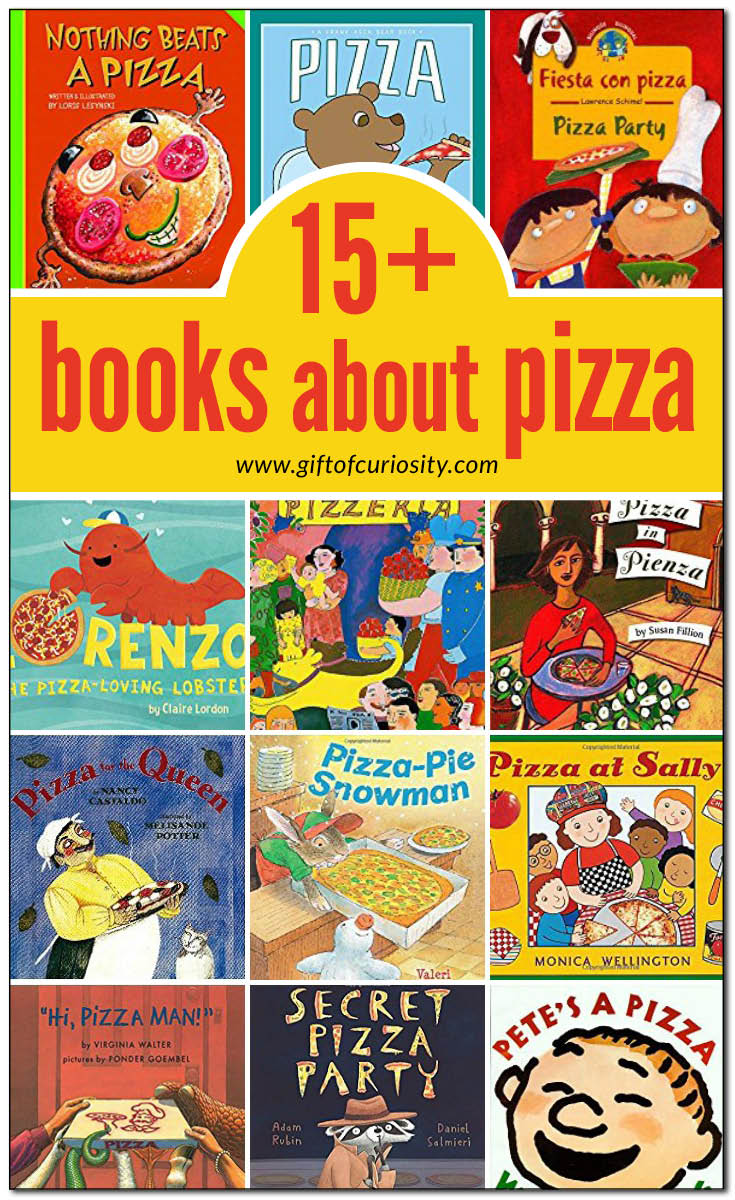 Pete’s a Pizza by William Steig

It is raining outside, and Pete is feeling upset because now he can’t play ball with his friends. His father comes up with a creative way to cheer him up – by turning him into a pizza! His father sets Pete down on the kitchen table. And then, as if Pete was the dough, begins to knead and stretch and throw him. Next, his father oils and flours the dough (by sprinkling water and talcum powder on Pete). When the dough is ready, his father adds tomato slices (which are really checkers) and cheese (which is really torn paper). Once the toppings are all added and Pete the pizza is baked (on the couch), his father carries him to the table to get sliced. At that point, Pete takes off running!  Fortunately, turning Pete into a pizza helped him feel better. After reading this book, both of my kids wanted to be turned into pizzas just like Pete. 🙂 Ages 3 to 7.

This is a very simple book, and my kids adored it. The story follows a girl who announces to her mom that she is hungry. The mom assures her that the pizza man will arrive soon with their meal. The mom then asks the girl, “What will you say when the doorbell rings and we open the door?” The girl responds, “Hi, Pizza Man!” So then the mom asks her what she will say if it’s a pizza woman. The girl responds, “Hi, Pizza Woman!” And what if it’s a pizza kitty, the mom asks? Or a pizza dog? Or a pizza duck? Young readers will laugh out loud as the girl imagines a variety of different animals coming to deliver her pizza and how she will great each one of them. Ages 3 to 8.

If you read this book with your kids, 1+1+1=1 has a kindergarten literature unit to go along with this story.

Pinky the pig is heading in to town to pick up a pizza with his favorite toppings – mushrooms, mozzarella cheese, fresh tomatoes, onions, and peas. He encounters many distractions along the way, including getting covered in snow, but he remains steadfastly focused on his goal of getting to the pizza shop. Thus, he doesn’t waiver even when everyone in town is exclaiming over a walking snowman. Only after he gets home and finishes the pizza with his mom does he set out to find the walking snowman everyone was talking about. Young children will be delighted at Pinky’s mistake in not realizing that *he* was the walking snowman everyone was talking about! Ages 3 to 7.

This fun and quirky story comes from the author and illustrator team who brought us the delightful book Dragons Love Tacos. Raccoon loves pizza, but because he is a raccoon he rarely gets to eat it. So he decides to have a secret pizza party at his house to enjoy all the pizza he wants. He disguises himself to order pizza at the local pizza shop, and then runs out before paying for the pizza. He runs as fast as he can, but gets chased by raccoon-sniffing broom-bots (yes, the story is quirky!). Eventually he makes it home with his pizza to begin his secret pizza party. But then he discovers an actual secret pizza party going on next door with lots of people and lots of pizza. Raccoon disguises himself to attend the party, but it isn’t long before he is discovered and the party goers are chasing after him again! Ages 3 to 8.

One evening Papa Bear and Mama Bear decide to go out to dinner at the new pizza parlor in town. Baby Bear has never tried pizza, and isn’t sure he will like it, but Mama Bear and Papa Bear assure him that he will. When the pizza finally arrives, Baby Bear lets it cool a bit and then tries a bite. He loves it! Baby Bear felt that he had never tasted something so yummy. That night he dreams of pizza. The next morning, his parents offer him several things for breakfast, but the only thing he wants is more pizza! Ages 3 to 7.

This sweet tale of family and love takes place against the backdrop of Little Nino’s Pizzeria, owned by the narrator’s dad. The narrator loves helping his dad makes pizza, pick up plates after the customers have finished, and carry out the dirty dishes. Little Nino’s Pizzeria is so successful that the dad decides to open a new restaurant called Big Nino. However, the narrator can no longer help in the dining room without a waiter tripping on him. And when he tries to help in the kitchen, the chef pushes him away. The narrator goes home feeling very sad. But one night his father returns from Big Nino feeling extra tired. He wants to get back to how things used to be. So the dad and narrator re-open Little Nino’s to continue delivering the best pizza in the world as a happy family once again. Ages 3 to 6.

Pizza at Sally’s by Monica Wellington

This story explains all the steps that Sally the pizza maker goes through to make and deliver her delicious pizza to hungry customers. She gets tomatoes from the community garden, wheat from far away farms, and cheese from the shop next door. Then she opens her pizzeria in the morning and begins to prepare the ingredients. Soon hungry customers come in or place orders over the phone. Young children will enjoy seeing the entire pizza making process that Sally goes through from getting her ingredients to delivering delicious pizza in her pizzeria. The back of the book includes a recipe to make Sally’s pizza. Ages 2 to 7.

The Little Red Hen (Makes a Pizza) by Philomen Sturges

One day when Lorenzo the lobster is walking on the beach, he meets a seagull who is eating pizza. The seagull shares some pizza with Lorenzo, who thinks it is so delicious that he rushes home to tell all his friends about it. Lorenzo and his friends decide to make pizza, but Lorenzo can’t quite remember the ingredients. The first pizza Lorenzo and his friends make has seaweed and kelp paste. But it doesn’t taste quite right. So they try making a pizza with kelp dough, squid ink, algae, and coral rings. But that doesn’t taste right either. His friends eventually leave, thinking that pizza actually tastes pretty awful. As his friend leaves, she smells something wonderful. A vendor is selling pizza on the beach! She buys some and brings it to Lorenzo to share. They enjoy the pizza, and they study it carefully to know how to make it properly the next time. Young children will laugh with delight at all the strange ingredients Lorenzo and his friend try to make their own pizza. Ages 3 to 8.

Pizza in Pienza by Susan Fillion

This book not only introduces young readers to the city of Pienza, Italy, it also provides a history lesson focused on pizza. For example, did you know that pizza originated in Naples, Italy as a peasant food sold by the slice? And the Pizza Margherita was named after the Queen when it was created by a pizza maker who wanted a green, white, and red pizza to honor the Italian flag? Pizza lovers ages 4+ will enjoy this brief history of pizza.

Pizza for the Queen by Nancy F. Castaldo

One day, Raffaele the pizza maker receives a request to make pizza for the queen. He feels honored and sets out to make some delicious pizzas for the queen so she will know what a Napoli pizza tastes like. He goes shopping for ingredients and then comes back to his pizzeria to make the pizzas for the queen. For the first pizza he decides to use green olive oil, fresh plum tomatoes, oregano, and garlic. On the second pizza he adds sausage, mozzarella, and fresh basil. For the third pizza, he is inspired by the Italian flag to add red tomato, fresh green basil, and slices of white mozzarella. When the queen tries the pizza, she enjoys them all. But she particularly likes the third one that has the colors of the Italian flag. After that day, pizza with red tomato, fresh green basil, and slices of white mozzarella becomes known as Pizza Margherita in honor of the queen.

Nothing Beats a Pizza by Loris Lesynski

This is a book of poems meant for reading out loud “with pizzazz.” Not all of the poems are related to pizza, but many are. We particularly enjoyed the pizza poem version of Goldilocks and the Three Bears. Ages 4+.

Ana and her friend Brad are making pizza. They roll the dough, spread the tomato sauce, and add lots of cheese. When the pizza comes out of the oven, they cut the pizza into eight slices, giving each of them four slices to eat. But just then, a friend appears and asks if he can eat pizza too. The three friends try to figure out how to divide eight slices among three people. So they bake another pizza and cut it into six slices, giving each of them two slices. But just as they are about to eat, two more friends show up. The story continues in this fashion with the kids trying to figure out how to split the pizza fairly among the people who want to eat. The book lends itself well to math discussions about fractions and dividing objects equally. Plus, this book is bilingual so it can be used for kids learning either English or Spanish. Ages 4 to 10.

This wonderful and colorful book combines some facts and history about pizza with some simple math lessons focused on addition, multiplication, and really, really big numbers. For example, did you know it would take more than 131,000,000 12-inch pizzas to circle the Earth at the equator? Ages 5 to 10.

This non-fiction book features real-life photographs of a girl and her father making pizza. Most steps of the pizza-making process are detailed, from adding each ingredient to putting it in the oven to eating the pizza when it is ready. Ages 2 to 6.

Pizza: The Pie That’s Not a Dessert by Elaine Landau

This non-fiction book discusses the history of pizza as a food for poor people in Italy. I was fascinated to learn that the first pizzas did not contain tomatoes or cheese. Later on, an Italian tavern-owner wanted to make a pizza with the red, white, and green colors of the Italian flag, so he used tomatoes, mozzarella cheese, and basil. The book describes pizza as both tasty and healthy (which I would argue is not necessarily true!). It also describes an easy pizza recipe you can make at home using an English muffin. The book also describes popular pizza toppings in the US and provides several fun facts about pizza in the back. Ages 4 to 9.

You’ll find more resources for learning about pizza on my Pizza Unit Study Pinterest board.